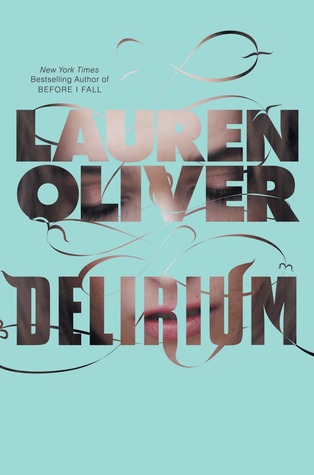 Lauren Oliver’s Before I Fall was my favorite book of 2010 and I was eagerly anticipating her new dystopian follow up. Since I’m such a fan of both Lauren Oliver and dystopian books I had high expectations Delirium. I’m happy to say Delirium did not disappoint, and impressed me just as much as her first book. I read this book originally several months ago and was pondering it for a while deciding what to say in a review. I was emotionally wrecked after reading it the first time. I decided to re-read it after publication to pull my thoughts together. I ended up listening to the audiobook format this time.

Delirium is takes place in Portland Maine in a future world where love is considered a disease. The disease is identified as amor deliria nervosa and scientists perform brain surgery on all citizens when they turn eighteen to cure them of the disease. Just before the procedure the candidates must submit to an interview before they can be matched to their ideal husband/wife.  The main character Lena is just about to turn eighteen, and is looking forward to her procedure. Both of her parents have died, and the cure for deliria did not work on her mother after 3 attempts. Lena’s best friend Hana is starting to rebel against the strict regulated books, music, and curfews they are expected to follow. Lena and Hana are at an after-curfew party when Lena meets up with Alex. They fall hard for each other but of course need to keep their relationship a secret. Unfortunately the clock is ticking on Lena’s procedure date.

The writing is incredible in this book. Ms. Oliver has a way with words and the emotions of the characters leap off the page. The writing is lovely and descriptive throughout the novel. Another nice touch is the passages at the beginning of each chapter. There are quotes from different government approved books, including the “Book of Shhh,” an abbreviation for “The Safety, Health, and Happiness Handbook.” These quotes provide more of a glimpse of the dystopian world.

The set up of the book was done well and showed Lena’s life prior to getting “infected” by Alex. In the beginning, Lena is on board with the government program to get matched and have the procedure. She did not want to end up un-cured like her mother, although she misses and remembers her fondly. The government restricts all kinds of activity that inspires love/deliria or laughter and bugs phone calls and conducts random raids to look for violations. It is interesting to see Lena’s opinion change as she becomes more intrigued with the lives of “resisters.”

This book explores relationships very well, and one of the strongest bonds in the book is between the friends Lena and Hana. They are best friends and have all kinds of plans of things they want to do before their procedure is scheduled. They enjoy going running together particularly. Lena worries that her friendship with Hana won’t be the same after the procedure.

The relationship between Alex and Lena is one of the most compelling aspects of the book. Their relationship is smoldering and passionate, and he opens her eyes to a different world. They have the odds stacked against them and it makes you want them to succeed as a couple that much more.

The book really shines in the final third of the book, when the action leads to a gut-wrenching cliffhanger. I can’t wait to find out what happens next. The next book in the series cannot arrive soon enough.

Regarding the audiobook – I enjoyed listening to the book in this format. Actress Sarah Drew reads the book. Grey’s Anatomy fans will know her as April. Since I listened to the book after I read it first, I had an opinion on what Lena’s voice would sound like. At first, the reader did not match up to my expectation of Lena’s voice. However, as I listened more to the story I felt the reader did a great job with conveying Lena’s emotions and with the voices of the other characters. The audiobook is just over 11.5 hours long.

Delirium is the first book in a trilogy. This book sets up the dystopian world well, but there is room to fill in more details about how the world ended up this way in future books. The premise seems believable and possible, and I enjoyed the dystopian elements. I would consider this book to be more about love and relationships first, but with a dystopian setting. I would recommend Delirium to fans of Before I Fall, as well as fans of YA and dystopians. The writing is simply beautiful, with a well-crafted story that will haunt you.

The next book in the trilogy is called Pandemonium, and it is due out in Feb. 2012.

6 thoughts on “Delirium by Lauren Oliver”