The Movie Date is a weekly feature where we discuss movies that may appeal to YA readers. Andrew is The Reading Date’s resident movie critic and this week he discusses Ender’s Game, directed by Gavin Hood, based on the novel by Orson Scott Card. 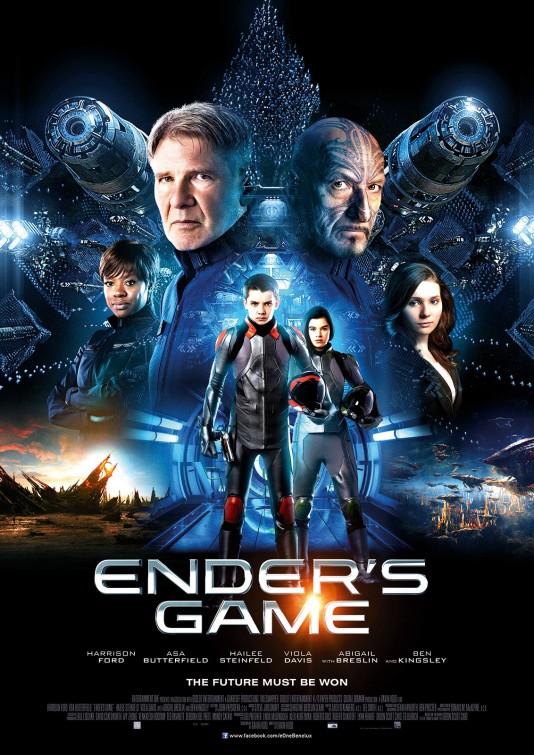 When the film of Ender’s Game finally opened last year, there was quite a bit of buzz surrounding it, both good and bad. The good buzz came from Hollywood begging to film the popular sci-fi yarn ever since the source novel came out in 1985 and from the book’s rabid fandom among both teen and adult readers. The bad buzz derived from unpopular comments by author Orson Scott Card regarding his beliefs, leading to boycotts of the film by special-interest groups. With the debate receding into memory and the film arriving on cable, I thought I’d check it out. Here’s the storyline:

Decades after mankind is nearly destroyed by ant-like Formic creatures from space, military commanders enlist and train young people to man battle computers, hoping to end the menace once and for all. Ender Wiggin (Asa Butterfield, Hugo) is remarkably talented at these martial tasks, not just as a shooter but as a gifted strategist. His brilliance is noted by Col. Graff (Harrison Ford) and Maj. Anderson (Viola Davis), who send him to an orbiting battle academy to accelerate his training. He’s befriended by other teen soldiers during battle simulations, where his refusal to follow orders irritates his young commander (Moisés Arias, Hannah Montana) but further intrigues Graff. As a new Formic attack takes shape, it looks like Ender may be ready to command the first strike against them…

If it sounds like Ender moves smoothly from student to trainee to soldier to commander, that’s exactly what happens, and that was my main problem with the film. Because the young hero never encounters any significant setbacks nor moments of self doubt, this becomes the glorious success story of a smug golden boy, a precious teacher’s pet. We follow Ender throughout the film but we’re never given any reason to like him. Near the film’s end our boy grows a conscience as he realizes what he’s been asked to do, but this comes out of nowhere, too little too late.

In between dazzling zero-gravity space skirmishes, the offworld Battle School is full of tired boot-camp, war-movie clichés—a Sarge who is not your friend while you drop and give him twenty, call-and-response songs while marching. While this tale of a school for gifted youths may sound like X-Men: First Class, no one here seems to be having any fun; there are few pranks, no laughs, and little team spirit. If you like CGI space battles, the ones here are gorgeous, and the cast is engaging; it also includes Ben Kingsley and both Hailee Steinfeld and Abigail Breslin. I don’t know if the novel’s plot is as linear and adversity-free as this film is—and I’d love to hear from readers who know the book—but for me this Game was a no-win.

Ender’s Game  is now available to rent or watch on cable. Ender’s Game is rated PG-13 and runs 114 min.