Mailbox Monday is a weekly event where we share our latest book arrivals. Link up and find new mailboxes to stalk at the Mailbox Monday blog. It’s been a while I’ve shared a book haul, so I’m playing a little catch up here. Let’s do this thing!

Here are some of the books that have made their way to me in the last month or so: 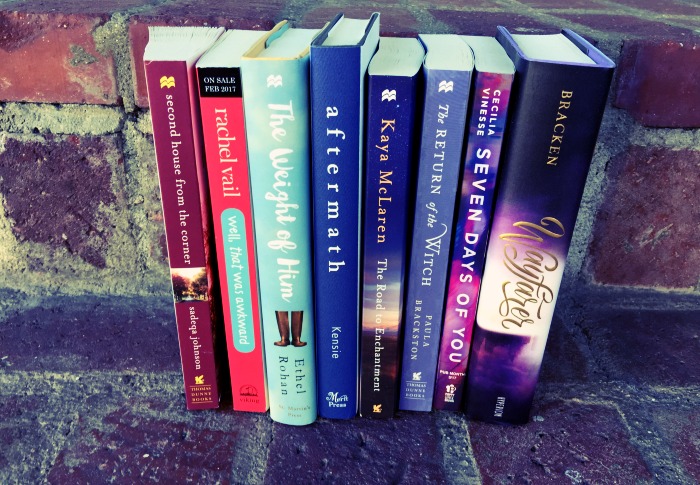 Second House from the Corner by Sadeqa Johnson from Macmillan – Felicia is overwhelmed with the stress of managing her household and yearns for a break. She gets her chance when some long-buried secrets come back to haunt her.

Well, That Was Awkward by Rachel Vail from Penguin Random House – In this middle grade read, Gracie and her friend have a crush on the same guy. Gracie bows aside and helps her out “Cyrano de Bergerac” style.

The Weight of Him by Ethel Rohan from Macmillan – This fiction debut takes on the issues of grief, suicide and obesity. A father sets out to lose weight to honor his son’s life and to raise money for suicide prevention.

Aftermath by Clara Kensie from Merit Press – Charlotte returns home after being held captive for four years. She’s haunted by the memories of the other kidnapped girl that wasn’t saved, and by the changes her family has gone through.

The Road to Enchantment by Kaya McLaren – Willow is grieving her mother’s death when her boyfriend dumps her and she finds out she’s pregnant. She returns home to New Mexico to deal with her mother’s affairs and make peace with the past.

The Return of the Witch by Paula Brackston from Macmillan – Book two in The Witch’s Daughter series is new to paperback.

Seven Days of You by Cecilia Vinesse from Hachette – Sophia has seven fun-filled days left in Tokyo before returning to the US. A guy from her past resurfaces and puts a kink in her plans.

Wayfarer by Alexandra Bracken from Big Honcho Media – The second book in the time-travel Passenger series.

That’s it for me this week! What’s new in your mailbox?