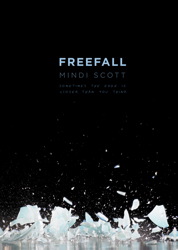 Summary from the publisher:

How do you come back from the point of no return?

Seth McCoy was the last person to see his best friend, Isaac, alive, and the first to find him dead. It was just another night, just another party, just another time when Isaac drank too much and passed out on the lawn. Only this time, Isaac didn’t wake up.

Convinced that his own actions led to his friend’s death, Seth is torn between turning his life around . . . or losing himself completely.

Then he meets Rosetta: so beautiful and so different from everything and everyone he’s ever known. But Rosetta has secrets of her own, and Seth soon realizes he isn’t the only one who needs saving . . .

Freefall is a powerful debut from author Mindi Scott. I picked this up on a whim at the library not really knowing what to expect. I’m so glad I did! I found the story engaging and well written. Freefall is an impressive work of contemporary fiction that should appeal to both males and females who are looking for a realistic teen portrayal.

The challenges faced by the characters are relevant and believable. It was easy to relate with the issues brought up, such as guilt, making the right choices, and dealing with social anxiety. For example, I found myself nodding in agreement with the techniques brought up to deal with nerves before a performance such as deep breathing.

I was a little wary at first to find that the story is told from a male’s perspective and written by a female. However, I found the protagonist Seth’s voice authentic and believable. Seth is dealing with a lot: grief and guilt over losing his best friend, failing grades, alcohol abuse, and stage fright about playing bass for a live audience. He is trying to turn his life around, and falls for Rosetta, who has her own issues.

Seth is a likeable character and I was rooting for him to succeed. I also liked Seth’s relationship with Rosetta, although I would have liked to read a little more about her progress with her issues. Seth’s friend/nonenemy Kendall is a good side character that is in a unique position to understand Seth’s grief. Seth’s band mates, and former band mates, provide an interesting contrast and support Seth’s growth. I would have loved to take “Mrs. Dalloway’s” Interpersonal Communications class in high school.

The ending was satisfying and made me smile. Overall, I was impressed by Freefall and am looking forward to Ms. Scott’s next book. Would love a sequel to Freefall!