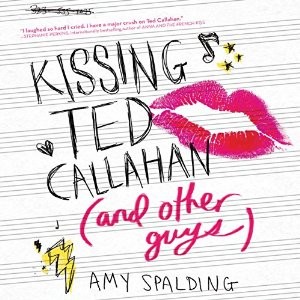 Also by this author: The Reece Malcolm List, Ink is Thicker Than Water

Nick and Norah's Infinite Playlist meets Easy A in this hilariously realistic story of sneaking out, making out, and playing in a band. After catching their bandmates in a compromising position, 16-year-old Los Angelenos Riley and Reid become painfully aware of the romance missing from their own lives. And so a pact is formed: They'll both try to make something happen with their respective crushes and document the experiences in a shared notebook. While Reid struggles with the moral dilemma of adopting a dog to win over someone's heart, Riley tries to make progress with Ted Callahan, who she's been obsessed with forever - his floppy hair! His undeniable intelligence! But suddenly cute guys are popping up everywhere. How did she never notice them before? With their love lives going from 0 to 60 in the blink of an eye, Riley and Reid realize the results of their pact may be more than they bargained for.

Kissing Ted Callahan (and Other Guys) is a fun & breezy book about music, friendship, Los Angeles, and yes, kissing. Sixteen-year-old Riley makes a pact with her bandmate Reid to kick start their romantic lives, and document their progress in a shared notebook. What could possibly go wrong?

When Riley and Reid find out their other two bandmates (Riley’s ex-BFF Lucy and Nathan) are hooking up they feel left behind. Riley has her eye on Ted Callahan and wants to make something happen with him. Her best guy friend Reid is open to going out with anyone who will have him. They document their dating adventures and tips in the notebook they dub the “Passenger Manifest” (a la LOST).

Riley’s romantic life takes off and she has three boyfriend prospects: her original crush Ted (Hot Dog on a Stick employee and leader of their high school’s underground blog,) rock aficionado & trombone player Milo, and science partner Garrick, who was once linked to a teen celeb. I was expecting Riley and Reid to realize through their notebook entries that they were meant to be, but refreshingly things don’t turn out how you expect.

The cover of this book has a retro vibe that continues into the pages of the book. Riley and Reid pass around a physical notebook, something that you don’t usually see teens in 2015 use to communicate. It works as a story-telling device and as something you would be scared of losing, though I guess it could have also been a hacked computer/phone, stolen flash drive too. Riley is into CD’s so she can play them in her car- maybe CD’s are the new vinyl? And Riley’s musical references are all over the map; from older stuff her parent’s got her into to the latest LA local bands. I thought she was a little too knowledgeable of older music but maybe she’s just obsessed with everything because of her music aspirations. Some of these little things took me out of the story but maybe I’m overthinking it.

This story is cute and witty, and like Spalding’s other books has a sex-positive, feminist vibe. This is probably Spalding’s funniest book yet. The protagonist Riley has an awkward, self-deprecating sense of humor and has some great one-liners.

This book is set in Los Angeles, and name-checks many famous hipster spots. It would be fun to take a Kissing Ted Callahan book tour of LA. Riley is a big music fan and shops at LA”s biggest record store, Amoeba. Since music is such a big part of the book, I was happy to see the author’s official book playlist:

I borrowed the Kissing Ted Callahan audiobook from the library. I’m not generally a fan of audiobooks performed by the author, but with Amy Spalding’s improv background I figured she’d make it work. Spalding does a good job inhabiting the characters and gives an energetic, entertaining performance. Part of the charm of Kissing Ted Callahan is the list, email, and journal entry format. However, those fun details are hard to translate to audio format. Plus, Riley has a lot of internal dialogue and it’s sometimes hard to tell if she’s talking to another character or herself. That being said, if you are an audio fan who likes humorous YA keep this one in mind.

Here is an audiobook sample- In this scene the “Passenger Manifest” is lost!

Need for November: Most Wanted Books
Top Ten Tuesday: Books I Feel as Though Everyone Has Read But Me
Indelible by Lani Woodland: Review and Bookmark Giveaway
Blog Tour: Poison by Bridget Zinn
2015 Armchair Audies – Teen Category Kick-off

4 thoughts on “Audiobook Review: Kissing Ted Callahan (and Other Guys) by Amy Spalding”