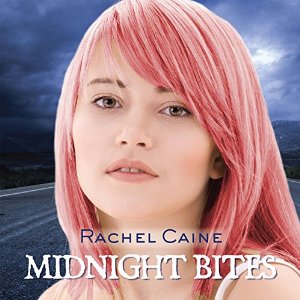 By day, Morganville, Texas, is just a typical college town. By night, the vampires emerge and take control . . .

In a town where it's not safe to be out after dark, student Claire Danvers and her friends have had their fair share of thrills. But Morganville still has a few secrets left to tell.

Now, in this collection, you can venture down the town's strange streets, revisit all the tales you've come to love, and experience six new stories featuring your favorite Morganville residents—both human and vampire.

It’s great to be back in Morganville! The Morganville Vampires series ended (Or did it? The author says the series is currently on pause) with book 15 Daylighters. Now Rachel Caine is back to tie up loose ends with Midnight Bites, a short story collection. All the Morganville short stories are now in one place for fans of the series to devour.

The Morganville Vampires series is set in Morganville, Texas and it’s about a group of (human) friends trying to survive in a vampire-controlled town. As the town saying goes:

Welcome to Morganville. You’ll never want to leave. And even if you do…well, you can’t.  Sorry about that. – Rachel Caine

Over the years Rachel Caine published 15 Morganville short stories on her website, in various anthologies, and for international exclusives. There were also six short story exclusives provided for contributors to her web series Kickstarter campaign. This compilation includes all 22 of these stories and it’s all in easy to follow chronological order. Caine also introduces each story with notes on how the stories came to be. I could have sworn I had read some of these stories on her website, but they all seemed new to me in this collection!

The Morganville series mainly followed protagonist Claire’s adventures, but this collection allows other characters their turn in the spotlight. There is backstory on everyone’s favorite bipolar vampire Myrnin, plus a little epilogue on the series that gives an update on the Glass House gang. I especially enjoyed the stories featuring Claire’s friend Eve and seeing a different side of her. The gang’s favorite haunts, Morganville regulars, and inside jokes are all on display in this collection. The stories run from a few pages in length to some longer, meatier stories. If you’re a Morganville fan I think you’ll have a lot of fun trip down memory lane with these stories. I’d recommend starting this collection after you’ve read the first 15 books though! Spoilers abound.

I listened to the Midnight Bites audiobook, narrated by Angela Dawe. Short stories lend themselves well to audio format since you can fit in a story or two in whenever you have a spare few minutes. Dawe took over the Morganville series narration from Cynthia Holloway starting with book 12. It’s jarring when narrators change mid-series but I think Dawe does a good job setting the tone with this collection. Her character voices were distinct and lined up with how I imagined the characters to sound. I did speed up the narration to 1.5x though to suit my listening taste.

Listen to the first 5 minutes of the Midnight Bites audiobook: