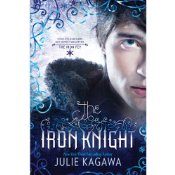 I was just saying recently how I put off reading end-of-series books as long as possible. Case in point: The Iron Knight, which has been out close to a year now. What finally got me to read The Iron Knight is the fact that the spinoff series is due out soon and I realized I still needed to read this book. The Iron Knight has all the action, adventure, love and humor that I’ve come to expect from this series.  And this installment has the added treat of sharing the POV of fan favorite Prince Ash.

It was interesting getting inside Ash’s head. The winter prince is such a dark, mysterious character that I was really looking forward to unraveling some of that mystery. Truth be told though, I really missed Meghan’s perspective and wish that there was an alternating POV instead. Even though I’m a big fan of Ash, this was maybe too much of a good thing. It was intense hearing his thoughts and inner turmoil for the whole book. I think that it was necessary due to the nature of the story to have Ash narrate; I just think that Meghan is a good balance to Ash’s moodiness and she was missed. It sounds like I didn’t like the story, but I really was ultimately satisfied. It took some time to get used to Ash’s voice and settle in at first but once the story got going I liked the choices Kagawa made.

Ash is on a quest that takes him to the end of the world to complete a task that no other fae has accomplished before. If he’s successful he will be that much closer to being with his true love Meghan. He has some help on his journey from Robin Goodfellow aka Puck, and Grimalkin, that sly cat, along with some other surprise companions.  If you like the Puck and Ash bromance let me say that you will not be disappointed in The Iron Knight. Ash’s trek is not easy and there are a lot of curveballs thrown at him that make you wonder whether he is on the right path after all. The journey is heart wrenching and unexpected and allows you to see what Ash is really made out of.

The audiobook, however, was a struggle to get through. As much as it pains me to say, I think narrator MacLeod Andrews was miscast for this book. I’m a huge fan of his narration of the book Will Grayson, Will Grayson; in fact it is one of my favorite audiobooks. Maybe it’s because I read the other books in the series and had my own idea of how the characters should sound that I ended up disappointed. I think I would have preferred if Andrews read the book straight rather than giving the characters distinct voices. His choices ended up being distracting, particularly for the voices of Ash, Puck and Grimalkin. The narrator for the other books in the series is Khristine Hvam, and she also makes a brief appearance in this audiobook. I really liked her voice for Meghan but I understand it would be weird for her to narrate this book as its Ash’s story. Though the audiobook didn’t work for me, if you like audiobooks listen to a sample and perhaps you’ll enjoy it more than I did.

One thing I really enjoyed is at the end of the audiobook there is an interview with author Julie Kagawa and audiobook narrator Khristine Hvam. I loved hearing Kagawa discuss her writing process, favorite characters, and inspirations for the books. Hvam asks great questions and it’s obvious she has great affection for the series. Hvam also talks about the process that goes into audiobook narration and I just found the whole conversation fascinating.

Though I had mixed feelings about the final Iron Fey book I’m so glad I read it through to the conclusion. I just love the characters and think the whole series is so fun and unique. I’m really looking forward to reading the first book of the new series The Lost Prince, featuring Meghan’s brother Ethan. Thanks Julie Kagawa for writing The Iron Knight – I don’t think my heart could stand it if the series ended with The Iron Queen!

4 thoughts on “The Iron Knight by Julie Kagawa: Audiobook Review”