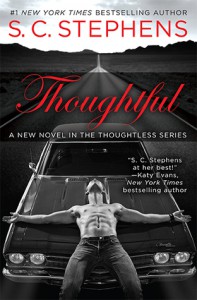 Also by this author: Furious Rush

Every story has two sides, and in this new book, the epic love story between Kiera and Kellan is shown through his eyes. All Kellan Kyle needs is his guitar, and some clean sheets of paper. Growing up in a house that was far from a home, he learned a hard lesson: You're worthless. Now his life is comfortably filled with passionate music, loyal band mates, and fast women...until he meets her. Kiera makes him ache for more. Makes him feel for the first time that he'sworth more. But there's one problem - she's his best friend's girl. Just when Kellan thought his emotional defenses were rock solid, Kiera's indecisive heart wreaks havoc on his soul, changing him forever. Losing Kiera is not an option.

When I was first getting into New Adult books, I tore through S.C. Stephens’ Thoughtless trilogy. Thoughtless is about Kiera, a girl torn between her boyfriend Denny and roommate/rocker/soulmate Kellan. This series, in particular Thoughtless, is an emotional and angsty romance with a frustratingly indecisive heroine. This trilogy wrapped up two years ago but has new life with Thoughtful. Thoughtful recounts the events of the first book through the eyes of rocker Kellan Kyle. Now you can see what was behind those soulful blue eyes and how he dealt with Kiera’s hot/cold pursuit.

Since it’s been some time since I read Thoughtless I enjoyed rediscovering it with a fresh perspective. Kiera can be an exhausting heroine (Denny/Kellan/Denny/Kellan/I can’t decide!) so it was refreshing to experience the events through new eyes. Thoughtful is a standalone book and there are no spoilers for the series. If you read this book first you can jump straight into the second book Effortless and pick up with Kiera’s pov.

Kellan is the singer and frontman of the Seattle-based D-Bags. He had a rough family life and battles loneliness through the arms of groupies. When his old childhood friend Denny moves in with him and brings girlfriend Kiera, he longs for a relationship like the one they have. And when Denny leaves town for work, Kiera and Kellan get closer and closer. Kellan is torn between his best friend and the love he thought he’d never have. And Kiera’s indecision puts Kellan through the wringer. Thoughtful takes away some of Kellan’s mystique and lets the reader see through to the real him, flaws and all.

I worried that this story would be very repetitive since I’ve read Kiera’s version. However, it was interesting learning more about Kellan and experiencing the scenes when he was without Kiera, such as band dynamics and his family history. If you were a big fan of the series I’d say this is a worthwhile read. The story is so angsty and addictive that the pages fly by. If you were lukewarm on the series the first time then I’m not sure this book will change your mind.

I read Thoughtful first in print and then had the opportunity to listen to the audiobook. Rebekkah Ross performed the first three audiobooks and actually did really well with the voice of Kellan (and Kiera, of course). But since this book is in Kellan’s pov it makes sense that there is a male narrator, and Jeremy Arthur takes on this daunting task. Honestly, I’m not sure if he was the perfect person for the job. His voice is perhaps a little mature for the 21-year-old Kellan. Arthur does a great job with Denny’s Australian accent, and with differentiating the other male voices in the cast. If I didn’t have a picture of this character in my mind ahead of time perhaps I would have enjoyed Arthur’s interpretation better. He also mispronounces the heroine’s name throughout the book (Kira instead of Kiera) and that was a bit distracting. The listening experience is subjective so take a listen for yourself before making a decision on this one.

Thoughtful is on sale today. Check out an excerpt here. (And if you want to read the rest of the trilogy, pick the ebooks up now for $2.99 each). There are more books in the Thoughtless series to come- look for Kellan’s bandmate Griffin’s story next in Untamed, due out November 5th.

Audiobook Review: We Should Hang Out Sometime by Josh Sundquist
Two Across by Jeff Bartsch Paperback Giveaway
Unbreak My Heart by Nicole Jacquelyn | Top 5 and Giveaway