It’s June 1st and the first day of Audiobook Month! I have some special posts planned to celebrate all things audiobooks, and today I’m kicking off the month by discussing one of the most hyped books of the spring- E. Lockhart’s We Were Liars. We’ve been hearing for months about the big twists and secrets (and their page numbers) reviewers must keep under wraps or else! I waited a little for the hype to die down before I started reading. Does it live up? Maybe. The ending sure left me rattled. 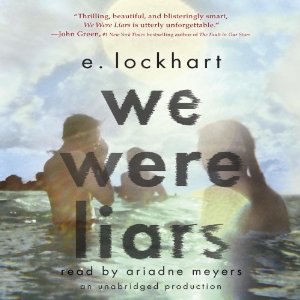 Book: We Were Liars by E. Lockhart, Listening Library, on sale now

We Were Liars is about a group of four family friends that call themselves the Liars. They summer with their families every year at an exclusive island off Cape Cod. During the 15th summer everything falls apart, and our unreliable narrator Cadence (Cady) Sinclair Eastman suffers a head injury and selective amnesia. The reader follows a scant trail of breadcrumbs to put it all together, but still, the final act will likely shock you.

It took me some time to warm up to this group of privileged teens. But as the book wore on I got more curious about Cady, her cousins Johnny and Mirren, and her love interest Gat, the outsider, who only see each other in the summer and live separate lives during the school year. Issues of class, race, gender roles, and privilege are on the table among the Liars, and their old-money families are at the mercy of Cady’s grandfather who holds the purse strings.

After the mysterious incident in the 15th summer, Cady returns two years later a different person. She’s dyed her hair black, has memory loss and migraines, and gives away her belongings. And adding to the mystery angle, all the Liars and family members are instructed not to tell Cady what happened two years ago. My mind was going to all kinds of dark places, but I was still way off base.

With the setting and Cady’s foggy headspace there is a dreamy quality to the book that is further enhanced by the dark fairytales that Cady references in the story.

E. Lockhart’s writing is smart and poetic, and the book is cleverly crafted.  I did feel detached from the story and the characters at times, but I’m thinking that’s part of the design of the book. Even if you feel a lack of connection to the story at first the mystery has a great payoff in the end that gives you all the feels.

I listened to the audiobook, performed by Ariadne Meyers and she made Cady’s confused state of mind believable. Her tone of voice is convincing when portraying these blue blood type characters. The pacing was fine and the male and female voices and age ranges were distinct. One reason you might want to go with the print version instead though is to flip back for reference. With a high concept book like this with so many surprises, the audio makes it tricky to go back and re-listen if you need to. However, listening to the story does make it feel more mysterious and chilling and Meyers does a good job selling this story.

Check out a sample of the audiobook, courtesy of Random House  Audio / Listening Library:

Read We Were Liars if you like: High concept mystery, literary YA, unreliable narrators, and twisty stories.

Have you read the book? What did you think? 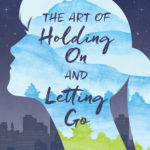 6 thoughts on “We Were Liars by E. Lockhart Audiobook Review”