Cora Carmack writes some of my favorite New Adult books, with lots of swoon, wit and emotion. She’s on my short list of auto-buy New Adult authors and her books are like candy. We’ve gotten to know Bliss’ BFF Kelsey in previous books, and now she gets her own story in this international adventure. Kelsey is Bliss’ footloose and fancy-free friend, who’s always looking for the next thrill. But the endless stream of nightclubs, booze and guys is getting old, and isn’t filling the void the way it used to. The mysterious Jackson Hunt provides a new sort of challenge if Kelsey is ready to take the next step.

More about Finding It: 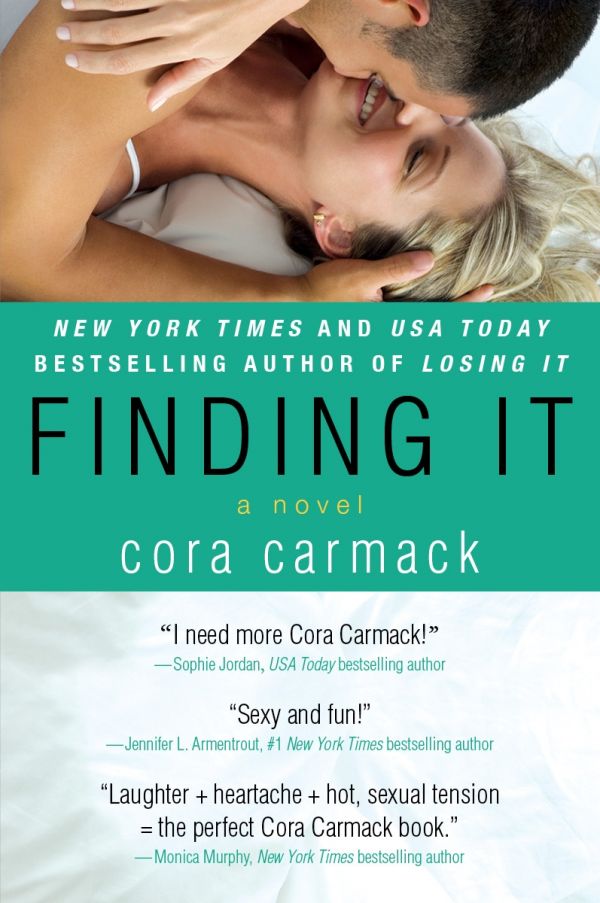 Book: Finding It (companion to Losing It, Faking It, and Keeping Her) by Cora Carmack, William Morrow Paperbacks, October 15, 2013

Most girls would kill to spend months traveling around Europe after college graduation with no responsibility, no parents, and no-limit credit cards. Kelsey Summers is no exception. She’s having the time of her life . . . or that’s what she keeps telling herself.

It’s a lonely business trying to find out who you are, especially when you’re afraid you won’t like what you discover. No amount of drinking or dancing can chase away Kelsey’s loneliness, but maybe Jackson Hunt can. After a few chance meetings, he convinces her to take a journey of adventure instead of alcohol. With each new city and experience, Kelsey’s mind becomes a little clearer and her heart a little less hers. Jackson helps her unravel her own dreams and desires. But the more she learns about herself, the more Kelsey realizes how little she knows about Jackson.

A lot of times the bad boys steal our hearts, and the gender role switch in Finding It is a nice change of pace. Kelsey is a party girl through and through and the difference between her and Bliss is like night and day, so at first it’s a little jarring to be in her head. But the post-college trip to Europe for Kelsey is quite transformative, and I quickly bonded with her. Kelsey has some baggage to deal with, and this international road trip provides the perfect backdrop for self-discovery.

Jackson Hunt doesn’t want to be just another one-night-stand. He is looking for something real, and Kelsey doesn’t know how to feel about that. And he seems to be hiding something, so can she trust him if she puts her heart out there?

Jackson and Kelsey’s romance is satisfyingly slow burn. Jackson is the one to put the brakes on acting on their chemistry while they get to know each other. Kelsey is very physically attracted to this ex-military man and not used to waiting. Their banter and sneaked in touches tease their romance.

Both characters have some skeletons in the closet, and both are not trusting sorts so they have their work cut out for them. Because they are both a little dark and damaged, each step forward is sweetly satisfying.

Finding It has a different feel than Cora Carmack’s other books; it’s more heavy, mature and raw. I liked that the experience felt new and I didn’t know what to expect from these characters. The European setting went well with the story, and it was also cool to get updates on home through calls with Bliss. If you haven’t given New Adult a try yet, I’d recommend starting with Cora Carmack’s books.

Other books in the series:

Losing It * Keeping Her * Faking It 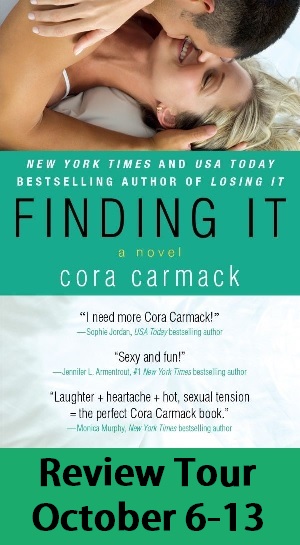 Cora Carmack is a twenty-something writer who likes to write about twenty-something characters. She’s done a multitude of things in her life– boring jobs (like working retail), Fun jobs (like working in a theatre), stressful jobs (like teaching), and dream jobs (like writing). She enjoys placing her characters in the most awkward situations possible, and then trying to help them get a boyfriend out of it. Awkward people need love, too. Her first book, LOSING IT, is a New York Times and USA Today bestseller.

8 thoughts on “Finding It by Cora Carmack Book Review”