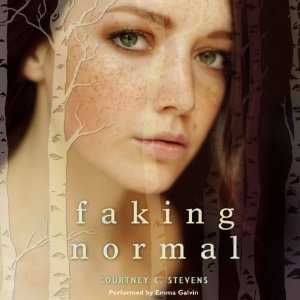 Faking Normal is Courtney C. Stevens’ debut novel, and it’s one I’ve had on my radar for a few months since I’m a realistic fiction fan. It’s about a girl dealing with the aftermath of a traumatic event, and how she copes, and who she can turn to in her darkest hours. The author explains it much better here:

We piece together a mystery in Faking Normal. We know that Alexi is hurting from an event that happened over the summer. We can see her hurt herself, and avoiding social events, but we don’t know why. Alexi keeps it all inside, like the title says, and can’t confide in her friends or family. Help comes from an unlikely source in the form of Bodee, a boy who is also suffering a great deal. Even though his pain is also so raw, or maybe because of that, he sees through Alexi’s façade and is able to get through to her the way that no one else can.

Though I haven’t been in Alexi’s specific situation, it felt to me that her behavior was realistic given the circumstances. We all have things we keep to ourselves, and the pain of Alexi’s secret felt very real. My heart went out to her, wanting her to reach out to someone for help, but understanding she was not physically or mentally ready to do so. She cuts as a coping mechanism, and another source of comfort are the lyrics the mysterious “Captain Lyric” leaves for Alexi on her desk at school.

Alexi’s friendship with Bodee is one of my favorite parts of the book. Sometimes people are there for you right when you need him, and Bodee is so sweet and careful with Alexi that he makes her feel truly safe.

I picked up the audiobook of Faking Normal, because I saw that one of my favorite narrators Emma Galvin performs it. Galvin does well with a variety of genres, but I think she’s particularly successful with action packed reads like Divergent. That said, Galvin connects with the characters and makes Alexi’s pain feel real. Galvin uses a Southern accent to go with the book’s setting, and makes both the male and female voices sound distinct. Lyrics play an important part in the narrative, so this book is probably just as powerful in print. Check out an audio sample:

Faking Normal is written from Alexi’s point of view, but there is a prequel novella called The Blue-Haired Boy (Bodee dyes his hair with Kool-Aid) that lets us into Bodee’s mind.

Faking Normal is a powerful, emotional read along the same vein as Speak by Laurie Halse Anderson. Alexi’s story arc is satisfying even though everything is not completely tied up at the end. Looking forward to reading more by this author.