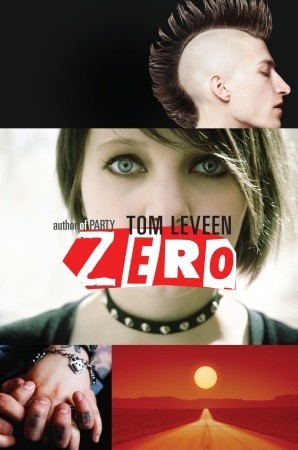 I thought I had this book pegged by the cover, which is so punk rock and artsy. I made some snap judgments about the book, thinking it would be a little dark and gritty for my taste. And while there is a fair amount of art and punk in the book, it is at its core a sweet story about a relationship and finding self worth. As I may have mentioned before though, I am a sucker for YA books about music so I jumped at the chance to check out Zero. Throw in an artistic, self-deprecating new adult protagonist and I was so on board with this one.

Amanda “Zero” Walsh has just received some bad news that rocked her world. She didn’t qualify for a coveted art school scholarship and won’t be able to swing the money on her own.  On top of that, things are beyond awkward with her best friend, and her dad’s drinking is spiraling out of control. Life takes an unexpected turn when she meets skate punk drummer Mike, and he helps give her a much-necessary boost of confidence.

Tom Leveen writes a realistic teenage girl character, one who is self-absorbed and a bit whiny, and dealing with lots of family drama. Amanda’s nickname Zero started out as a put-down junior high kids called her because she was the loner art chick.  However, it stuck and she decided to own it, and even her own dad calls her Z rather than Amanda, or the dreaded Amy. Amanda has body image issues and low self-esteem and uses humor and sarcasm as a coping mechanism. She is a gifted artist and idolizes Salvador Dali, but she lacks the confidence to take her art to the next level. She has one close friend, Jenn, but they have a mysterious falling out.  In a big moment of bravery she approaches the gorgeous-eyed drummer of up and coming band Gothic Rainbow, and they begin a relationship.

Mike the drummer is very crush-worthy, sweet and mature, and his scenes with Amanda spark with electricity. He is not a stereotypical rock-musician type at all, and in case you’re wondering he doesn’t have a Mohawk, as the cover would suggest. Leveen captures the feeling of first love really well, with an awkwardness and obsessiveness that rings true. And even though the two care for each other a lot, they both have a driving passion for their art that demands their attention.  Their relationship goes a long way towards helping Amanda’s confidence issues, and takes some interesting and unconventional turns. It is also a more mature relationship, both mentally and physically, than found in most other YA books.

Leveen’s writing has a lot of personality and includes some humorous asides to the reader. He captures the feeling of being at a rock show, with authentic band and song names. Also, Amanda’s passion for her art comes through clearly and she gets lost in her art and makes many artistic references. I liked the feminist leanings of the book too and that the relationship wasn’t the only thing in Amanda and Mike’s lives.

Zero would be a great book for people that enjoy books about new adults, people who don’t fit in, and fans of art, music and romance. Don’t judge this book by its cover – there is a lot more beneath the surface.

Other Reviews of Zero:

10 thoughts on “Zero by Tom Leveen”