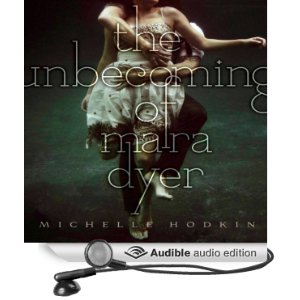 The Unbecoming of Mara Dyer came out in print two and a half years ago but is just now making its audiobook debut. I remember being charmed by this gorgeous book cover but never had the chance to read the book. The plot of Mara Dyer centers on a big mystery, and the reader is left in the dark as much as the title character. You don’t really get all (or any?) of the answers in the first part of the trilogy but flashbacks/dreams/visions provide some pieces of the puzzle. The mystery part of it was interesting to me, though I can’t say I completely bought the romantic side of the book.

Mara Dyer is a mystery / romance about a girl who wakes up in a hospital with no memory of how she arrived there. She was with her friends and there was an accident that left everyone dead, except Mara. PTSD and strange unexplainable visions (and deaths!) follow her around in her new town, making her think she’s losing her mind. Meanwhile, the school manwhore is smitten with Mara and she can’t seem to resist him.

Because Mara Dyer has this high concept mystery, the reading experience is a little confusing as you’re trying to pieces together what the heck is happening. I had to consider Mara Dyer to be an unreliable narrator as I questioned what was real and what was not in this book.

I wanted to know more about what was happening to Mara, but the romance with Noah Shaw started to take over the book. Noah Shaw is the guy every girl wants- he’s wealthy, has a British accent, is cocky and smart and gorgeous, and of course Mara’s the only girl for him. If you buy into the romance you will probably love this book.

I listened to the audiobook, performed by Christy Romano, who is an actress and the voice of Kim Possible. She has not performed in too many audiobooks but the author saw Romano in a play in New York and thought her voice was a perfect match for Mara. (listen to the author Michelle Hodkin interview Christy Romano in the link below)

Romano’s voice sounds age appropriate for Mara, and she has good comic timing to deliver the humorous lines. Romano is talented at accents, and especially uses a convincing male British accent for the voice of Noah. There were some technical issues that distracted me at times such as re-recorded dialogue and some misinterpreted lines. Overall I enjoyed the performance though and thought Romano was a good pick. The audiobook also includes a couple chapters from the second book in the trilogy.

This is one of those books that readers seem to love or hate. I zipped through this book fairly quickly and was entertained, though I’m not going to jump right into the sequel just yet either. I am really curious about the mystery though and how it’s all going to work out. The Evolution of Mara Dyer is out now, and the last book in the trilogy, The Retribution of Mara Dyer is due out June 10.

Check out a sample from The Unbecoming of Mara Dyer, performed by Christy Romano:

6 thoughts on “The Unbecoming of Mara Dyer Audiobook Review”