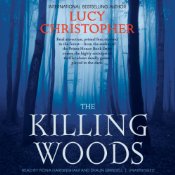 I kept thinking of Twin Peaks when I was reading The Killing Woods. The book kicks off with the mystery of a dead, popular girl carried out of the woods. There are numerous suspects in her killing, especially the guy who’s carrying the body, an ex-soldier with PTSD. Two people are especially eager to solve the crime- Ashlee’s boyfriend, Damon, who can’t remember the night she died, and the prime suspect’s daughter, Emily. The investigation leads to Darkwood, the spooky woods where Damon and his friends (including Ashlee) played a mysterious “Game”. There’s not any kooky Log Lady characters or supernatural elements in The Killing Woods though- it’s a straight whodunit with an atmospheric backdrop.

Lucy Christopher is best known as the author of Stolen, which I’ve heard great things about, but haven’t had a chance to read yet. With The Killing Woods, Christopher writes a mystery that makes you want to keep reading until you solve the crime. In The Killing Woods the setting and mystery are the stars. We get to know the characters a little bit but the main storyline is- Who Killed Ashlee Parker?

The story is suspenseful and makes you suspect everyone in this small town. This is a quiet and moody book with not a lot of action. However, I found it easy to get lost in and I was never bored. The writing reminded me very much of Maggie Stiefvater’s books if that gives you an idea of the tone.

The book has short chapters that alternate between Emily and Damon’s POV. Emily wants to clear her dad’s name, and her amateur detective work takes her to some scary places. She’s clever and levelheaded and has always had a little crush on Damon so this murder is problematic in more ways than one.  Damon thinks the murder case is cut and dry until he starts talking it over with Emily. He has a lot of things to work out over the course of the investigation.

Besides the investigation, another theme of the book is PTSD. Emily’s dad gets flashbacks from his time in combat, and holes down in a bunker in the woods to draw and deal with his demons. It’s an interesting look at the circumstances that lead to PTSD, the effect on a family, and on day-to-day life for the sufferer.

I listened to the audiobook of The Killing Woods, performed by Fiona Hardingham (The Scorpio Races) and Shaun Grindell (The Hamish Macbeth Mysteries). I quite liked The Scorpio Races audiobook so I looked forward to hearing Hardingham again. She has a pleasant voice to listen to and is great with accents. I’m not entirely sure where this book is set- I think I read it’s set in Wales? Hardingham’s welsh accent is perfect for the story though. Shaun Grindell’s voice is appropriate for the popular, distraught Damon. He sounds like a Hemsworth brother and that seems about right for this story. Both performers read with an intensity in line with the tone of the book. The audiobook made the story even more suspenseful and made the dark woods feel alive.

The Killing Woods is on sale now, and perfect for fans of darkly atmospheric mysteries. Check back tomorrow for a cool giveaway opportunity!

9 thoughts on “The Killing Woods by Lucy Christopher Audiobook Review”