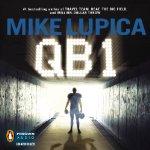 I’m pretty sure I’m not the target audience for this book, even though I do love Friday Night Lights and sports YA books. Even though I couldn’t follow a football game if I tried, that didn’t stop me from checking out this football-centered audiobook. And though the book is very football-heavy, it has a lot of character and heart. QB 1 follows a family of football players reminiscent of the Manning family, and explores what it’s like to follow in the footsteps of greatness.

QB 1 is set in a Texas high school football-obsessed town, and is about a young freshman quarterback with something to prove. Jake Cullen is part of a football legacy family and lives in the shadow of his famous dad and older brother. His older brother Wyatt was the star quarterback at Granger High School and now is a hotshot quarterback at the Univ. of Texas.  Now Jake has the daunting task to fill his brother’s footsteps, and prove to his naysayers and himself that he’s got what it takes to win.

The town of Granger, Texas lives and breathes football. The high school team is like local celebrities, and Jake gets free food at the diner, and has people come up and ask about his big brother Wyatt all the time. Jake is learning that what worked for his dad and his brother may not work for Jake in the game of football. But it’s hard to get out of the shadows and make your own name for yourself.

We follow Jake through his practices and games as he fights for a spot to be QB 1 against another ambitious player. Jake has a tight knit family who love him, though it seems to Jake that Wyatt gets all the attention. How can his own high school football games compare to his older brothers televised games? Anyone with a sibling can relate to feeling overlooked in favor of his or her brother or sister.

Jake is a smart, levelheaded guy, who is a team player and a natural born leader, even though he’s just a freshman. Yes, Matt Saracen from FNL came to mind as I was listening to the audiobook. Jake even has his own “Julie” crush, and she’s a cheerleader named Sarah. I rooted for Jake to make his dreams come true. He has a great group of friends in his corner too, and the team dynamic rang true.

I listened to the audiobook, read by new-to-me narrator Nicolas Tecosky.  The narration helped a football ignorant person like me follow along and get caught up in the games. Tecosky does a great job with giving the play by play like a pro, and it feels like you’re listening to a real game. I think if I was reading the book instead, I wouldn’t have gotten as much out of the story, personally. The narration brought the football action to life. And Tecosky gives Jake an earnest and endearing quality with his reading. His Texan accent added flavor to the story, and he gives a distinct voice to the varying coaches, players, and family members. This audiobook is just under six hours long and is time well spent.

QB 1 should appeal to fans of Friday Night Lights, of football, or of contemporary YA. The book reads like a young YA or MG, and the root for the underdog and family theme should appeal to a wide audience. The writing is tight and focused, and it’s obvious Mike Lupica has a love of football, and is very knowledgeable of the sport. He is a sports writer after all. I wish there was a little more story off the field, or time spent on balancing classes/homework with football, but I liked the message of the story. Texas forever!