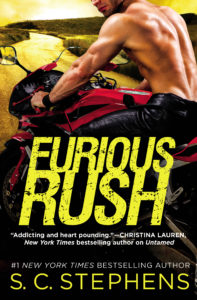 Also by this author: Thoughtful

The first in an emotion-fueled, New Adult series from the #1 bestselling author of the Thoughtless novels!

Too fast, too furious—and way too hot to handle…

Mackenzie Cox has a lot to prove. Daughter of a racing legend, she is eager to show the world that she has inherited her father's talent in the male-dominated sport of professional motorcycle racing. The last thing Kenzie needs is to be antagonized by her rival team's newest rider, Hayden Hayes. Plucked from the world of illegal street racing, Hayden immediately gets under Kenzie's skin. His insinuations that Kenzie is a spoiled princess who was handed her career fuels her desire to win, and much to her surprise, Kenzie soon learns she performs better when she's racing against Hayden.

As Kenzie and Hayden push each other on the track, the electric energy between them off the track shifts into an intense—and strictly forbidden—attraction. The only rule between their two ultra-competitive teams is zero contact. Kenzie always does her best to play by the rules, but when her team slips into a financial crisis, she has no choice but to turn to Hayden for help. The tension simmers during their secret, late-night rendezvous, but Kenzie has too much to lose to give in to her desires. Especially when she begins to doubt that Hayden has completely left his street life behind...

Rev up your engines for Furious Rush, on sale now! Furious Rush is the first book in a new series that’s set in the professional motorcycle-racing world. In this book, two racers from competing teams train to leave the competition in the dust, while trying to keep their growing feelings for each other hidden. The rules state these competitors have to keep away from each other in this forbidden love story.

Mackenzie races for her dad’s motorcycle team, and she struggles to prove that she’s just as talented and driven as her male teammates. Her dad is especially hard on her- no special treatment. When a new hotshot racer shows up on the rival team Mackenzie can’t seem to stay away. Hayden comes from the street racing world and now wants the credibility that a professional team provides. His reputation makes the other racers think he plays dirty. But Kenzie finds that racing with Hayden brings out the best in both of them, on and off the track.

I like sports romances even though I’m not remotely sporty, and this is my first experience with motorcycle racing, unless Sons of Anarchy counts. It seems like author S.C. Stephens had a handle on getting the racing terms of this extreme sport right. The racing track was a very unique setting, and I enjoyed the thrills the competition aspect provided as well as the romance.

I’m familiar with S.C. Stephens’ rockstar romance Thoughtless series. It was cool to see a different side of this author and to meet a new set of characters. There is lots of drama in Furious Rush, but I wouldn’t say it’s as angsty as the Thoughtless series.

It is my understanding that Furious Rush is the first book in a series, though so far no other book info has been added on Goodreads. There are loose ends at the conclusion of the book, so I’d expect that there is more drama to come!

Furious Rush is on sale now from Forever

To help celebrate the release of Furious Rush, author S.C. Stephens provides us with a rockin’ Top 5:

1. Imagine Dragons. I love all their songs, but when I saw them in concert, I was blown away. The lead singer performs exactly how I picture Kellan performing. It was a surreal experience.

2. Linkin Park. The sound of this band (on a lot of their songs) is exactly how I imagine the D-Bags sounding. LP will always hold a special place in my heart. Plus their concerts are amazing! They sound just as good live.

3. OneRepublic. These guys were on constant repeat while I was writing the Thoughtless trilogy. I love them with all my heart. And I got to stand thisclose to Ryan Tedder during a meet and greet. Awe-some.

4. Old Dominion. My honey-boo has been slowly getting me into country music. I just picked up their album, and I love every song! I also love the fact that the scratch and sniff bacon sticker on the cover smells like cotton candy (the album is called Meat and Candy—haha!).

5. Every Avenue. I cried the day this band broke up, and I did an all-day Twitter celebration on the day of their last concert. A fan turned me on to the band after Thoughtless was released, and I was amazed by how well their lyrics fit the story—its uncanny! These guys are also the only band I have gotten autographs from. Thanks to a reader, I was able to get a copy of Effortless signed by every single member. Best. Gift. Ever.

Thanks, S.C! I can definitely hear the D-Bags sound in some of these bands, plus I can imagine these would be great racing tunes as well!

25 copies of Furious Rush are up for grabs, courtesy of Forever Romance! Fill out the Rafflecopter to enter:

Literary Agent Round Table: A New Look at New Adult
How I Fell for New Adult
No Attachments by Tiffany King Book Review
Cover Reveal: Hear Me by Viv Daniels
Blog Tour: One & Only by Viv Daniels Guest Post and Giveaway
Effortless by S.C. Stephens Audiobook Review

Love Between the Lines: An Adult Coloring Book for Book Lovers
The Protector by Jodi Ellen Malpas – Spotlight and Giveaway
Last Kiss of Summer – Top 5 Foodie Fiction and Giveaway!