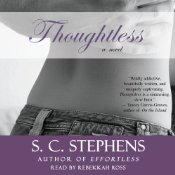 Thoughtless started out as a self-publishing smash hit and now the trilogy is being introduced to a wider audience with the backing of Simon & Schuster’s Gallery Books. Thoughtless is at heart about a love triangle. It’s tricky because both of the guys the heroine cares for are root-worthy so it’s heart wrenching knowing that one or both will get hurt. It’s full of angst but I was hooked from the start and couldn’t put it down. It does get melodramatic at times, and the protagonist is a little infuriating, but I couldn’t stop myself from jumping directly into the sequel.

In Thoughtless, Kiera planned to stay with her long term and devoted boyfriend Denny forever. She relocated from Ohio to Seattle to be with him when he accepts a new job, and now must start classes at a new university.  But when Denny’s career takes him away, Kiera bonds with their roommate Kellan, a local up and coming rock star, and one of Denny’s best friends. Things get very messy for the trio…

The story is addictive but the cheating and the lies are hard to swallow at times. Kiera strings along both Kellan and Denny for ages and there are some very uncomfortable scenes. She is very naïve about her relationship with Kellan and is generally thoughtless as the title suggests. Just when you think she’s finally made a decision between the two, she backtracks. She’s a frustrating heroine- weak and needy, but surprisingly she didn’t break the book for me. I guess Kellan and Denny pull up the slack and make Kiera a little more tolerable.  The damaged Kellan is especially charismatic and likable, and his scenes with Kiera sizzle.

I felt so torn and conflicted reading this book, and the sneaking around and the web of lies were giving me an ulcer. But the author does a great job making you feel a character connection and bringing the passion to life. The characters have really stayed with me. I also like that music is tied in with the book through Kellan’s rock band, and that adds a lot of interesting scenarios.

Rebekkah Ross (Collateral) reads the audiobook and I have to say I’m a fan. Her voice is age appropriate for Kiera and is true to the page. Denny’s Australian accent comes across well, and his quiet, sweet personality comes through. Her Kellan is also confident and believable. Ross did a commendable job overall making me care about the characters and I would happily listen to more books read by her. The audiobook is lengthy- almost 21 hours- and some of the back and forth does go on too long, but I still made good time with the audiobook, considering.

If you like passionate and angsty romance, this is the book for you. Thoughtless is a good crossover book for New Adult fans (especially if you liked Beautiful Disaster) as well as contemporary romance readers.   I’ve already read the second book in the trilogy, Effortless, and liked it even more than Thoughtless. I’m eager to read Reckless in March and hope my heart can stand it.

Blog Tour: It Ends With Us by Colleen Hoover
Reckless by S.C. Stephens Audiobook Review