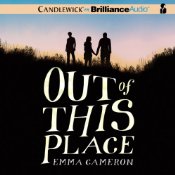 Audiobook: Out of This Place by Emma Cameron, published by Candlewick on Brilliance Audio, May 14, 2013

Out of This Place was originally released last year under the title Cinnamon Rain by Australian author Emma Cameron. I’m a fan of verse novels so was so excited to see this one was getting a US release. This book is short but packs an emotional punch, and the verse format makes the story that much more meaningful. Out of This Place chronicles the tale of three high school teens: Luke, Casey, and Bongo. All three have difficulties at home and long for a better future.

The book has three parts, with Luke, Casey and Bongo sharing their stories in turn. It’s interesting reading about the characters through one person’s eyes and then gleaning more insight into the others when it’s their turn to share.  The trio is in Year 10 in school, which I think is the same as sophomore year in the US.  We follow them in their post high school years so you could almost consider this new adult I guess.

Luke kicks off the book and right away we learn about his crush on Casey.  Casey’s father is really tough on her and Luke worries about her home situation. He also looks out for Bongo, who self-medicates to get through his difficult family life. Casey has the middle story. She thinks she was an unwanted child and that her dad still resents her. She wants something more out of life, and knows she has to make it happen for herself. Bongo also has a thing for Casey, and he wants to get his little brother back from foster care.  He seems like he has the toughest uphill battle to climb.

I liked the multi POV and how it was used to get us up to speed on all the characters lives. It also goes to show that we don’t know everything there is to know about our good friends, because things are not always what they seem on the outside.

One of the messages that spoke to me was the idea of shaping your own family, letting people in, and accepting help. The friendships formed in the book really made a difference in their lives.

I picked up the audiobook of Out of This Place, which is maybe an unconventional choice for a novel in verse. I was sold on the audio though when I saw that there were three separate narrators for each character’s part. Also, the narrators are Australian and since the book is set there I thought that would give just the right flavor to the story. I also have a review copy of the book so I would refer to it as well from time to time to see the verse on the page. The narrators do a good job of making you feel the characters emotions, but perhaps some of the verse feeling wasn’t as strong as it is in print. I thought Casey’s part was where the verse shined through the most, interestingly. I did think I understood the slang a little better with Australian narrators and it did bring the setting more to life. Many verse novels are fast reads, and in fact this audiobook is just over three hours long, but it manages to convey quite a powerful story in that time.

I can see why the title was changed from Cinnamon Rain, but I think that title was kind of perfect as well. Here is a verse sample from the book that gives some context to the original (and new) title.

“I want out of this place.

This is a really fast read that I think fans of verse novels and contemporary YA will enjoy. Hope you seek this one out!