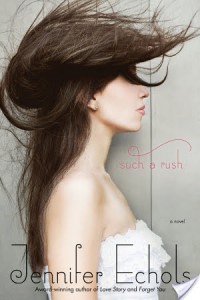 A sexy and poignant romantic tale of a young daredevil pilot caught between two brothers. When I was fourteen, I made a decision. If I was doomed to live in a trailer park next to an airport, I could complain about the smell of the jet fuel like my mom, I could drink myself to death over the noise like everybody else, or I could learn to fly. Heaven Beach, South Carolina, is anything but, if you live at the low-rent end of town. All her life, Leah Jones has been the grown-up in her family, while her mother moves from boyfriend to boyfriend, letting any available money slip out of her hands. At school, they may diss Leah as trash, but she’s the one who negotiates with the landlord when the rent’s not paid. At fourteen, she’s the one who gets a job at the nearby airstrip. But there’s one way Leah can escape reality. Saving every penny she can, she begs quiet Mr. Hall, who runs an aerial banner-advertising business at the airstrip and also offers flight lessons, to take her up just once. Leaving the trailer park far beneath her and swooping out over the sea is a rush greater than anything she’s ever experienced, and when Mr. Hall offers to give her cut-rate flight lessons, she feels ready to touch the sky. By the time she’s a high school senior, Leah has become a good enough pilot that Mr. Hall offers her a job flying a banner plane. It seems like a dream come true . . . but turns out to be just as fleeting as any dream. Mr. Hall dies suddenly, leaving everything he owned in the hands of his teenage sons: golden boy Alec and adrenaline junkie Grayson. And they're determined to keep the banner planes flying. Though Leah has crushed on Grayson for years, she’s leery of getting involved in what now seems like a doomed business—until Grayson betrays her by digging up her most damning secret. Holding it over her head, he forces her to fly for secret reasons of his own, reasons involving Alec. Now Leah finds herself drawn into a battle between brothers—and the consequences could be deadly.

Such a Rush is a perfect summer read and probably my favorite Jennifer Echols book. Prior to reading Such a Rush I had only read Love Story by this author, but after finishing her latest I immediately picked up (and finished) Going Too Far and Forget You. Not even my painful broken wrist could keep me from finishing this one! Echols’ blend of romance, interesting characters, witty dialogue and dramatic intrigue makes her latest book a favorite of mine.

Echols writes romantic dramas and romantic comedies, and Such a Rush is her latest drama. One thing I’ve enjoyed in her books is the interesting careers/hobbies she features, from law enforcement, swim team, and creative writing, and with Such a Rush, aviation.

In Such a Rush, the cards are stacked against Leah Jones. Her mom frequently leaves her alone in the trailer they share in Heaven Beach, South Carolina. To help make ends meet, Leah takes a job as a receptionist at the nearby airport. But soon Leah falls in love with airplanes and sees flying as her ticket out of town. Leah’s boss Mr. Hall sees potential in Leah and agrees to give her flying lessons. Flash forward a few years, and Leah’s flying is coming along great, but she suddenly loses her mentor, and Mr. Hall’s teenage sons Grayson and Alec want to take over. Leah’s welcome to stay and fly for the brothers, but there are strings attached, and the added complication of a long-time crush Leah’s had on Grayson.

I love the concept of this one – Leah has had a rough time of it no question, but flying is her escape. She goes to school with kids wealthier than her and has to buy her own groceries and help her mom pay the bills. She has a certain reputation at school that has given her peers the wrong impression. She has one close friend named Molly, but there’s always a divide between them as well. Flying planes is the best thing that has happened to her, along with learning from her mentor/father figure Mr. Hall. Leah is strong and wants to make something of her life, even though she has a lot of obstacles in the way. She’s not the type to ask for help and I admired her work ethic and self-motivation.

The twin brothers Grayson and Alec also made some assumptions about Leah that make their working relationship awkward. Grayson is arrogant and reckless but is trying to change his ways, while Alec is the more sweet and even-tempered brother. Not to worry though, there is not a traditional love triangle per se, which is not to say things are not complicated between the three of them.

Echols knows how to write romantic tension and this book is exploding with it. Besides the flying and family drama going on with Leah, sparks will fly and there is plenty of heat. It is on the A side of YA so keep that in mind.

The scenes with Leah flying planes are awesome and made me feel a sense of freedom right along with her. The airport setting works really well and along with the romance delivers the rush that the title promises.

Echols’ fans will eat this one up, and if you’re looking for the perfect summer beach read look no further. It even snapped me out of a mini reading rut. Such a Rush is fun and exciting but has some depth to it as well. Look for Such a Rush to hit shelves on Tuesday July 10. Look for Echols’ first romantic comedy for adults called Star Crossed in February 2013.

Congrats to Brittany who has won a copy of SUCH A RUSH!