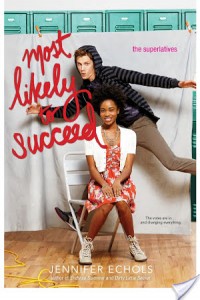 Also by this author: Love Story, Such a Rush, Biggest Flirts, Perfect Couple

In this sexy conclusion to The Superlatives trilogy from Endless Summer author Jennifer Echols, Sawyer and Kaye might just be perfect for each other—if only they could admit it.As vice president of Student Council, Kaye knows the importance of keeping order. Not only in school, but in her personal life. Which is why she and her boyfriend, Aidan, already have their lives mapped out: attend Columbia University together, pursue banking careers, and eventually get married. Everything Kaye has accomplished in high school—student government, cheerleading, stellar grades—has been in preparation for that future.To his entire class, Sawyer is an irreverent bad boy. His antics on the field as school mascot and his love of partying have earned him total slacker status. But while he and Kaye appear to be opposites on every level, fate—and their friends—keep conspiring to throw them together. Perhaps the seniors see the simmering attraction Kaye and Sawyer are unwilling to acknowledge to themselves…As the year unfolds, Kaye begins to realize her ideal life is not what she thought. And Sawyer decides it’s finally time to let down the facade and show everyone who he really is. Is a relationship between them most likely to succeed—or will it be their favorite mistake?

With Most Likely To Succeed, the Superlatives series draws to a close. This series centers around a group of friends at a Florida high school and each book showcases a couple voted “most likely to…” The last installment features class clown and series favorite Sawyer and the popular and brainy head cheerleader Kaye. These two were named The Perfect Couple That Never Was. And once Kaye is free from her controlling boyfriend Aidan she’s eager to see if she and school mascot Sawyer really do have chemistry off the field.

Kaye has a really bright future- she is in line for class valedictorian; she’s student council vice president with plans to attend Columbia. Her CEO mother pushes her to be the best and thinks that cheerleading isn’t going to help her reach her academic goals.

Her mother thinks Aidan is a great match for Kaye, but he is very competitive and jealous of any of Kaye’s successes and seems to not have her best interest at heart.

Sawyer, meanwhile, wishes he had parents that cared as much about his welfare. He’s currently living with friends, working two jobs (plus being the Pelican mascot) and taking advanced level classes. But people still see him as someone not to be taken seriously and he really wants to be worthy of Kaye’s affections.

I like that this series turns stereotypes upside down and features really interesting unconventional pairings. The series has a sex-positive vibe, realistic teenage portrayals, diverse characters, and deals with relatable issues. Plus they are just fun, engaging reads.

Sawyer has been one of my favorite characters from the beginning and his book did not disappoint. I enjoyed getting to see another side of him and seeing his great chemistry with Kaye. The romance has its ups and downs and I could have done without the villainy Aidan getting in the way, but I still think this is my favorite pairing of the series.

This book also references the couples from the previous books, but you can still read it as a standalone. This series is kind of under the radar and now that it’s complete I hope more people dig into it. I was thankful to have this to read one night when it was too hot to sleep, and the series also makes a good back-to-school read.

One thought on “Most Likely To Succeed by Jennifer Echols”