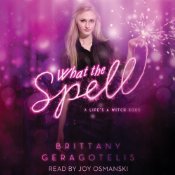 What the Spell is the first book in the Life’s a Witch series about a sixteen-year-old witch just coming into her powers. The series started out as a big success on Wattpad, and now Simon & Schuster is bringing it to the masses.

Teen witch Brooklyn has always been a social outcast but now that her magical powers are “unbound” she decides to give herself a total makeover. Maybe now the Elite will notice her and she’ll get the attention she’s always wanted. But if her magical secret gets out it could spell danger for her loved ones. What the Spell puts a Pretty Little Liars spin on the Salem Witch Trials and is a cautionary tale about the perils of popularity.

I had heard that this series is a modern-day look at the Salem Witch trials, and the dangers of getting caught using magic. Brooklyn’s parents for instance are very low-key with their magic for fear of exposure. But it wasn’t as much of a witch-hunt so to speak, though there are hints that there is trouble ahead. The life of a teen witch (twitch) is all cute love spells and tricks and Brooklyn takes full advantage of her talents to climb up the social ladder.

The idea of being true to yourself, and not compromising your beliefs for popularity, is a good one. At one time or another everyone wishes they could be popular, or even just to fit in, so Brooklyn’s story is relatable to a certain extent. But I couldn’t feel much sympathy for her due to her consistently bad choices and lack of character growth. Her boyfriend Asher is also a witch, and his family uses magic but doesn’t let it get out of hand. Maybe Brooklyn wouldn’t have been so out of control if she didn’t have to wait sixteen years to flex her magic muscles. One character highlight is Asher’s sensible, bookish little sister Abby, and hopefully she’ll have a bigger part later in the series.

I listened to the audiobook of What the Spell, read by Joy Osmanski. She’s a good fit for the book, and gets into Brooklyn’s head very well. It was easy to differentiate the different characters, from the snobby Elite members to parents and teachers. The voices are not overdone, but have enough character to keep things interesting. The audiobook was entertaining, and I might have skimmed through the book if I was reading it on its own.

I think this series will appeal to fans of series like Pretty Little Liars. It’s paranormal light and heavy on the social drama. The character’s are not very likable but the message deep down is a good one. The next book actually centers on a new character, so I’m kind of curious to see how it plays out. What the Spell is available now, and the sequel, Life’s a Witch, is out in July.

3 thoughts on “What the Spell by Brittany Geragotelis Audiobook Review”