Hey gang, I’m in San Diego this week with my husband, my daughter and her friend to experience the madness of Comic-Con! Tonight was preview night, a chance to walk the exhibit hall when the crowds theoretically are a little more manageable. There are also some fall pilot screenings in ballroom 20 on preview night, but I decided to just hang out in the exhibit hall as long as I could stand it. It’s still very crowded! It was a breeze picking up the badges in Sail’s pavilion, and we waited in line for about an hour and a half for the exhibit hall to open. We were people watching and reading our kindles while we waited.

My daughter and her friend wanted to buy a My Little Pony Derpy doll from Hasbro, and Andrew was interested in checking out the TV screenings. And my goals were to visit several of the publisher’s booths and some of the movie booths like Lionsgate and Summit. Here’s how we did:

1. Hasbro – The girls were told that all the My Little Pony dolls were sold out immediately, and they were so disappointed! Hopefully we’ll have better luck tomorrow. This is the doll they are after:

2. Pilot screening of 666 PARK AVENUE in Ballroom 20- Andrew’s notes: An update of Rosemary’s Baby: New Yorkers dwelling in an Upper West Side apartment building make deals with the mysterious owner Kevin (Lost’s Terry O’Quinn), who may or may not be the Devil. Tenants, of course, pay an awful price for achieving success; one former resident, we’re told, “moved to a warmer place.” The story follows Jane, a young wife who with her husband take over as building managers. Effective enough but not quite gripping; certainly nowhere nearly as terrifying as American Horror Story, for instance. Then again I’m not really a fan of serialized supernatural shows.

3. I was able to visit several of the publisher’s booths and picked up several books. There was a lot of interest from attendees in all the upcoming releases. The publisher reps were happily chatting with everyone about books and asking questions to make book recommendations. There are many author panels and signings over the next few days and I wish I could attend them all.

These are the panels I’m planning to attend on Thursday, hopefully the timing will all work out:

The Scoop at Simon & Schuster! – Get the inside word on Simon & Schuster’s upcoming books and the chance to win exclusive prizes. Lucille Rettino (director of marketing), Carolyn Swerdloff (marketing manager), Chrissy Noh (senior marketing manager), Liesa Abrams (associate marketing manager), and Anna McKean (publicity manager) give you the scoop on upcoming books from exciting authors, including Cassandra Clare, Tonya Hurley, Tony DiTerlizzi, Orson Scott Card, and Brandon Mull. Hear what is going on with S&S’s hot properties — Star Trek and The Smurfs — and get a chance to win exclusive giveaways. All attendees will receive a limited edition T-shirt for Becca Fitzpatrick’s Hush, Hush.

These are the books I picked up today:

So far it has been a fun time at Comic-Con and we are all looking forward to tomorrow and bracing ourselves for the crowds. This is the line for Hall H as of tonight where we’ll be in the morning bright and early: 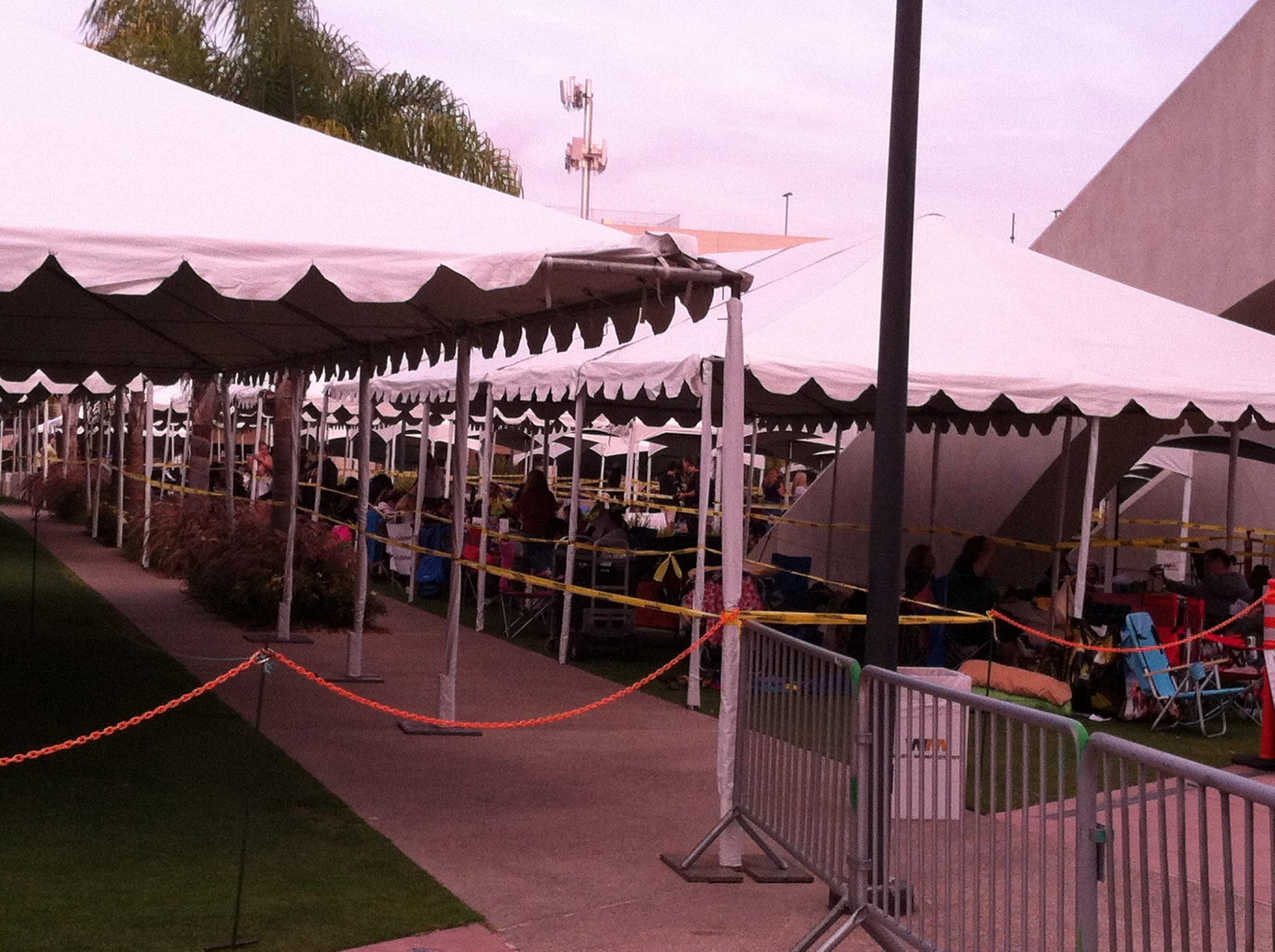 I’ll try to check in with another report from Comic-Con tomorrow! Time for some shut-eye…

12 thoughts on “Comic Con Preview Night – All the books”