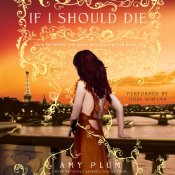 I am the biggest procrastinator when it comes to finishing series books.  I don’t know why, but it takes me forever to wrap up a series – maybe I’m not ready to say goodbye to the characters or worry that the finale will be a letdown. So, I’ve had the last book of the Revenants trilogy on my kindle since its release date unread, but when I saw the audiobook at the library I felt it was time to bite the bullet.

Readers of this blog know that my appetite for paranormal has waned, but there are a few paranormal series I still try to keep up with. This series is set in Paris and is a romance between an immortal Revenant (a self-sacrificing, honorable, zombie-like guy) and a human girl who lost her parents. Kate and Vincent have this epic love story that makes you want to root for them, despite their differences. The series has been working towards something big, and big things definitely happen in If I Should Die.

This book is a game changer, and there are surprises and sacrifices in store. The biggest change is Kate’s personal growth, and she takes a bigger role in the fight between good and evil. Everyone else is second fiddle to Kate, and there are less light-hearted moments than in previous books. There is a lot of action and discovery, and some new characters are introduced along the way. If you’ve followed the Revenants series, you may have predicted how the series would end, and Amy Plum has some tricks up her sleeve that I didn’t consider.

I like Vincent just fine, but I have a soft spot for his lovable friend Jules. He’s the comic relief while Vincent is so serious. Jules does not have a big part in this book, and I think that brought the mood down a bit. At least he gets to star in his own novella though!

The series ties up most of the loose ends, and leaves the characters in an interesting place. My favorite part of the book is the third act when the action really ramps up. Some of the earlier parts of the book went into too much detail for me, and I was starting to zone out, but I’m glad I stuck with it.

Julia Whelan narrates the audiobook, and it was a treat to hear her read another book in this series. Since most of the action is set in Paris, there are French accents, names and places that sound even better when they are pronounced correctly by a narrator. Whelan is comfortable with American and French, and male and female voices, has a good reading pace, and was in tune with the emotional tone of the book.

This book was entertaining, but I think I preferred the first two books a little more. There is a lot of story packed into this book, and I missed seeing more of some of the other characters that have been such an important part of previous books. Even though there are no more books in the works for this series, the story felt like it was ripe for a spin-off. Amy Plum’s next book is called After The End, and it’s the first book of a new dystopian series.