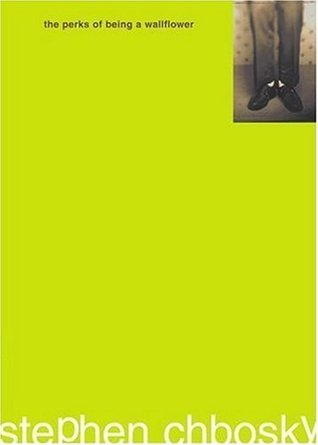 Book: The Perks of Being a Wallflower by Stephen Chbosky, MTV Books, YA Contemporary, Book received for review, Trade PB 213 pages, 1999.

This book has been on my radar for years, but I missed it when it first came out back in 1999. Now the book is experiencing a resurgence in popularity thanks to the upcoming movie release. The Perks of Being a Wallflower is an epistolary novel, written in letter format anonymously from lonely fifteen-year-old high school freshman Charlie to an unnamed sympathetic and understanding friend. Charlie writes by way of introduction:

So, this is my life. And I want you to know that I am both happy and sad and I’m still trying to figure out how that could be.

Charlie is sensitive and socially awkward, and doesn’t have any close friends to confide in. He’s a big reader and falls in love with the classics in his English class. His teacher encourages his reading by assigning him more and more books to read, such as On The Road, The Catcher in the Rye, The Stranger and Naked Lunch. He starts out as a loner in school, but he soon starts hanging out with a group of seniors, including siblings Patrick and Sam.

In this year-in-the-life coming-of-age story, there are a lot of social issues explored; for instance, sexuality, suicide, abuse, family and friend relationships, drugs, abortion – you name it. Charlie is really an innocent but does a lot of growing up over his freshman year in high school. I enjoyed this short powerful read a lot, but I think I would have loved it even more had I read it in high school. My daughter recently read it and called it her “An Imperial Affliction” so I can say it definitely resonates with her young teen age group.

Charlie is a refreshing and unusual protagonist in that he’s such an introvert. I liked seeing someone with his characteristics in a YA book and thought it was a good portrayal. The author is very insightful with his character choices and I especially appreciated the realistic way he portrays Mary Elizabeth, Charlie’s reluctant romantic interest. (He’s really interested in the girl Sam)

I really liked this one and think it would be a great choice for a book club to read in conjunction with the movie. A lot of the topics are still very relevant to YA’s of today and it also works for adults to look back on their high school years. It takes place in the 90s so there are some interesting pop culture references that crop up too. Since the author Stephen Chbosky is also the writer and director of the upcoming film I’m cautiously optimistic about it and look forward to seeing it. The film hits theaters September 20th.

The Perks of Being a Wallflower: The Music

Charlie has eclectic taste and loves to make mix tapes, and in fact music is a character unto itself in the book. Since the book takes place in the 90s there are a lot of musical references from that decade, but Charlie also likes older stuff too. He makes a mixtape entitled One Winter for his friend and Secret Santa Patrick, and the songs seem to suit Charlie’s character perfectly. Here are a few of the songs Charlie includes on One Winter:

This is one of the most melancholy songs by The Smiths and really helps set the tone for the book. It is Charlie’s favorite song by far, and in fact he starts AND ends his mixtape with this song since he loves it so much! A defining song for the book.

Ride, Vapour Trail
This band definitely takes me back to the 90s, and in fact this band was inspired by The Smiths so it makes sense for them to be here. The lyrics make me think of Charlie’s feelings for Sam.

Smashing Pumpkins, Daydream
Another defining nineties band, but this song doesn’t have the typical Smashing Pumpkins sound. I like D’arcy’s pretty, haunting vocal on this.

Fleetwood Mac, Landslide
This song is used in the popular tunnel scene in the book:

And in that moment, I swear we were infinite.

U2, MLK
I think Charlie chooses this song because it’s one of Sam’s favorites.

This is just a small sampling of the songs referenced in the book. And if you’re anything like me, you’ll want to track down many of the songs listed after you read the book. SmallGirlsPR have put together a comprehensive Spotify playlist of all the songs from the book, and it has been on heavy rotation in my house. Check it out here.

I’m glad I read the book before seeing the movie, and I hope the movie does the book justice. The cast does look pretty great though. If you’ve read the book, what do you think? Are you planning to see the movie?

Audiobook Review: 99 Days by Katie Cotugno
Waiting On Guy in Real Life by Steve Brezenoff
Book Spotlight: The Villa by Rosanna Ley
Favorite Diverse Titles of 2014
Top Ten Tuesday: Top 10 Books I would like to see as movies