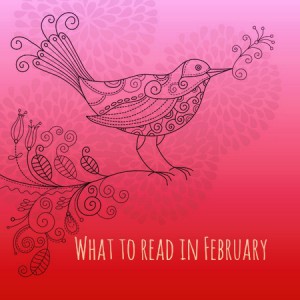 I don’t know about you- but January was a heavy month! Lots of sad, intense books, and some heavy life stuff to go with it. I’m thinking I need a few fluffy reads in February. Maybe even a few friendship reads to go with Galentine’s Day. Of course, the books I’ve selected to check out this month are not fluffy at all but I have some carryover books in mind that might fit the bill.

The First Wife by Erica Spindler – Feb.10, St. Martin’s Press. I liked The Girl on the Train so I want to try out more thrillers. This book is about a woman who marries a near-stranger and finds out his first wife disappeared under mysterious circumstances.

Girl in a Band by Kim Gordon – Feb. 24, Dey Street Books. This is a memoir by Sonic Youth member Kim Gordon that talks about the end of her longtime marriage to her bandmate, family life, and her time spent in New York in the 80s and 90s during Sonic Youth’s heyday.

Shadow Study by Maria V. Snyder – Feb. 24, Mira. The long-awaited continuation/spinoff of the Study series! The last book came out in 2008 I think, and this new Soul Finders series continues the adventures of Yelena and Valek. (These books definitely have crossover appeal and you see them frequently shelved as YA)

Finding Jake by Bryan Reardon – Feb. 24, William Morrow & Co. A parent deals with the fact that his son was involved in a school shooting.

Hero by Samantha Young – Feb. 3, NAL. This is a new standalone contemporary romance from the author of the On Dublin Street series.

Thoughtful by S.C. Stephens  – Feb. 24, Forever. The Thoughtless trilogy is the story of Kiera and her love for rocker Kellan Kyle. In this novel we see the love story through Kellan’s eyes.

I’ll Meet You There by Heather Demetrios – Feb. 3, Henry Holt and Co. Lots of good early buzz on this one. This contemporary romance has themes of PTSD and family drama.

Unspeakable by Abbie Rushton – Feb. 5, Atom. This LGBT coming-of-age is about a girl trying to find her voice again.

The Ruby Circle by Richelle Mead – Feb. 10, Razorbill. The 6th and final Bloodlines book! Currently sitting at the top of Goodreads “Most Popular Books Published in February” list.

The Last Time We Say Goodbye by Cynthia Hand – Feb. 10, HarperTeen. I loved Hand’s Unearthly series, and look forward to reading her first foray into contemporary. (Even though I know this is going to make me cry)

The Distance Between Lost and Found by Kathryn Holmes – Feb. 17, HarperTeen. This contemporary debut is about a girl who distrusts others after a boy spreads lies about her. The tale turns into a story of survival when the group gets lost on a hiking retreat.

What books are on your radar for February?