The Movie Date is a weekly feature where we discuss movies that may appeal to the YA audience. In this double feature edition, Andrew examines two recent Sci-Fi films: In Time (2011), directed by Andrew Niccol (The Host) and Never Let Me Go (2010), directed by Mark Romanek. 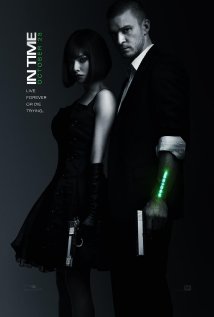 Two very different films with the same premise: a world in which medical science allows people to live virtually forever, but only the very wealthy, and only by sacrificing the lives of the impoverished young. In pursuit of love, our protagonists try to find ways to beat the system, with varying degrees of success.

In tone, the two films couldn’t be more different. In Time is more or less a straight-up sci-fi thriller from Andrew Niccol, who previously gave us the sensitive futuristic drama Gattaca. The tricky premise here is that one’s time, as in future longevity, is the national currency; one’s balance (eg minutes left before “timing out”) is displayed in a countdown readout on one’s forearm. Time can be transferred person to person via physical contact or into metal storage devices; all goods and services are purchased this way. All citizens stop aging physically when they reach 25; to survive beyond that, they must gain extra years by working hard or having wealthy parents. And prices in the ghetto just keep going up…

Living in the poor neighborhood of Dayton (get it, “day”-ton?) is Will (Justin Timberlake). When his beautiful mother (Olivia Wilde) times out and dies in his arms, Will vows to make those who control time to pay dearly. The gift of a hundred years from a mysterious stranger allows Will to enter the ritzy, long-living town of New Greenwich, where he meets doe-eyed heiress Sylvia (Amanda Seyfreid). They return to poor old Dayton and set about righting the economic, er, temporal imbalance by robbing Sylvia’s rich daddy (Mad Men’s Vincent Kartheiser). He’s the King John in this clever rewrite of Robin Hood, with Cillian Murphy (Batman Begins) as the Sheriff of Nottingham character, Sylvia as Maid Marion, and Will, of course, as Robin.

Things go about as you expect, but the ride is a blast, and Niccol’s retro-future design, relying on classic 1940s Los Angeles architecture and vintage automobiles, keeps the story both grounded and artful.

Never Let Me Go, a poignant musing on mortality based on a Kazuo Ishiguro novel, is less concerned with changing one’s fate than it is simply accepting it. In this world, longevity 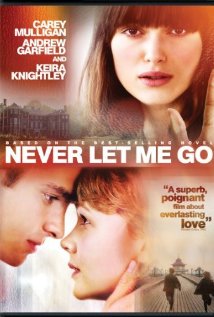 is achieved through cloning: the wealthy have themselves copied, and when they grow ill they simply request organ donations from their living clones, here known as “donors.” No donor survives more than four donations, and some “complete” after their first. This is no scandal but has become the English way of life, with the donor underclass slowly discovering and grimly accepting its fate.

We meet our three main characters—introspective Kathy, outgoing Ruth, and awkward Tommy—as they come of age in a private school in the countryside. The three form a romantic triangle, and when we meet them again a decade later, we see nothing has changed. Kathy (Carey Mulligan), Ruth (Keira Knightley), and Tommy (Andrew Garfield) still share an uncomfortable friendship as they enter the Cottages, a kind of hippie commune, awaiting their first donation. Kathy painfully observes Tommy and Ruth’s now torrid romance.

While there, a friend asks: is it true that, if couples prove they’re really in love, they can obtain a deferral and postpone their donations? The question haunts the remainder of the film as Kathy becomes a “carer,” a sort of hospice worker for recovering or completing donors, and reconnects with Ruth and Tommy, now multiple donors. Together the trio rights the wrongs of the past and struggles for slightly longer futures.

Where In Time has lots of car chases and gunplay, Never Let Me Go has its characters gazing wistfully at horizons and ruminating in voice-over. Again, these are two very different films; I think many readers will enjoy one but not the other, depending on their tastes. But both ask the same question—what do I really want and how long do I have to get it?—and embrace the notion that the greatest wealth is not money but time: hours on our clock, pages on our calendar, minutes left with which to seize the day.

3 thoughts on “The Movie Date: In Time / Never Let Me Go”