The Movie Date is a weekly feature where we discuss movies that may appeal to the YA audience. Andrew is The Reading Date’s resident movie critic and this week he discusses The Maze Runner, directed by Wes Ball, and based on the book by James Dashner. We have not read The Maze Runner so we just sat back and enjoyed the film without any preconceived notions. 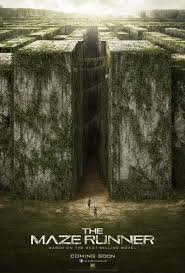 A teen boy wakes up at the center of a vast maze that can only be entered during daylight hours; neither he nor his dozens of peers can remember their lives before.

The “greenie” (eg, newbie) learns that he’s the latest in a series of monthly arrivals, new maze recruits sent up to the Glade in an elevator along with a huge ration of food and supplies. His many brethren, mostly friendly but some hostile and suspicious, introduce him to their little community, which spends its time gardening and building makeshift huts. After getting knocked down in a friendly battle, the greenie remembers his name: Thomas.

Thomas (Dylan O’Brien, MTV’s Teen Wolf series) is fascinated by the huge gates that open every morning, breaching the 150-foot walls that enclose their verdant camp. The gates provide access to a vast labyrinth that isolates the prisoners from the outside world—and their freedom. Every day a small team of runners enters the maze to chart its twists and turns, being careful to return before nightfall. If not, they’ll be attacked by Grievers, huge scorpion robots that prowl the maze. One evening lead runner Minho is unable to escape in time, so Thomas races inside to help him, trapping both within the maze. “Good job,” Minho tells him as the massive gates slam shut. “You just killed yourself…”

Two stories come to mind: The Lord of the Flies and The Hunger Games. The film actually resembles the former at times as the kids grapple for power while struggling to survive and hoping to escape. But other than the likelihood that this conflict is being orchestrated by unseen others, The Maze Runner is less like Hunger Games than you’d think. For starters, since the story’s seen entirely through Thomas’ eyes, we the audience have no idea what the heck is going on beyond the Glade and the maze walls. In fact, trying to solve this grand puzzle was for me the film’s greatest pleasure. Because Thomas initially has no past and no heroic quest, it’s hard to identify or sympathize with the character at the start. And though he remembers his origins and finds his personal mission, I still found myself more engaged in the larger mystery of the tale. 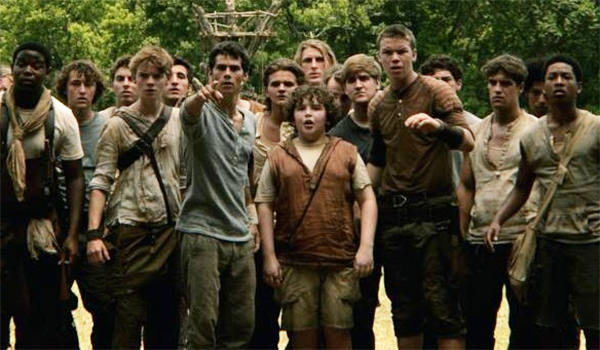 The excellent cast features a number of familiar faces: Thomas Brodie-Sangster from Love Actually; Kaya Scodelario from Clash of the Titans (she plays the Glade’s final recruit and its only female); Will Poulter from We’re the Millers (he’s the group’s bully and the film’s villain, more or less). We grow fond of the camp’s many young citizens and feel the pain when some fall by the wayside. Though the mystery of the labyrinth is finally explained, it’s clear that greater puzzles await the players and the audience alike. This fine film is a worthy addition to the recent series of young-adult fiction adaptations, and I can’t wait for sequel The Scorch Trials to hit the big screen someday…

The Maze Runner is #1 at the box office this weekend! Did you see it? If you’ve read the book, how do you think it compared?

Just Between Us by J.H. Trumble Book Review
Top Ten Books I Read in 2012

7 thoughts on “The Movie Date: The Maze Runner”