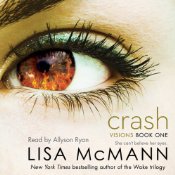 I’m a fan of the Dream Catcher trilogy so was happy to see Lisa McMann come out with the new Visions series.  Like the Dream Catcher series, McMann blends realistic contemporary and paranormal in her own signature way in Crash. We got off to a bit of a slow start, but I liked how everything tied together in the end. The mystery of the visions kept me in suspense and the supporting characters have a lot of charm. This book is a fast read and has an interesting concept, and I’m curious to see how the series progresses.

High school sophomore Jules is a middle child and her family runs a pizza restaurant, Demarco’s. She and her siblings work in the restaurant and make deliveries- driving around in the meatball-topped food truck. Their rival chain is the more popular Angotti’s Trattoria, and Jules’ forbidden crush Sawyer works there with his family.  Jules is hiding a big secret- she is seeing visions. And they appear all the time, in billboards, in dreams, on TV. She can’t escape them. These visions show a truck causing a building explosion- and 9 body bags. More details appear with each vision and soon she sees the specific building and the faces of the victims, but can she stop the crash in time?

I felt for poor Jules holding on to this secret. I can’t imagine seeing such terrifying visions everywhere! Plus, mental illness runs in her family so in the back of her mind she’s wondering if that’s what’s behind the visions. She does manage to have a good sense of humor though, and made me laugh with her lists of challenges that go along with working in a pizza restaurant. The vision idea reminded me of the book Unearthly where the visions play a part in the heroine’s purpose. But in Crash, Jules doesn’t have a mentor to guide her.

The family dynamic between Jules and her siblings Rowan and Trey is enjoyable. I like how they look out for each other and their sibling bond. The rivalry between the Angotti and Demarco families adds another layer of tension and is interesting to see how it plays out. We learn some backstory but I think there’s more to uncover there.

Romance plays a small role in the book and the forbidden aspect kept things interesting. Sawyer is mysterious but I liked what we saw of him. The pizza chain rivalry definitely adds a challenge for the pair!

I listened to the audiobook of Crash, read by veteran narrator Allyson Ryan.  The audiobook is a scant 5 hours, and it’s a nice change of pace to listen to these quickie audiobooks. It is my first experience with Ryan and she is obviously a skilled narrator. She can take on the voices of the different male and female voices and ages well. My one comment is her voice for Jules is a little mature for the sixteen year old, and that detracts from the story at times. But she has a clear, easy to understand voice and reads with emotion; I’m just not sure she was the best fit for this book.

The first book in the 4-book Visions series gets off to a promising start. It’s a little slow at the beginning but it pays off at the end. The conclusion has an interesting twist and makes me want to know what happens next. 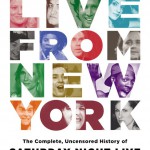