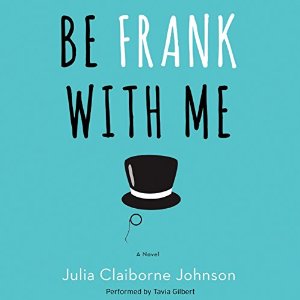 Reclusive literary legend M. M. "Mimi" Banning has been holed up in her Bel Air mansion for years. But after falling prey to a Bernie Madoff-style Ponzi scheme, she's flat broke. Now Mimi must write a new book for the first time in decades, and to ensure the timely delivery of her manuscript, her New York publisher sends an assistant to monitor her progress. The prickly Mimi reluctantly complies - with a few stipulations: no Ivy Leaguers or English majors. Must drive, cook, tidy. Computer whiz. Good with kids. Quiet, discreet, sane.

When Alice Whitley arrives at the Banning mansion, she's put to work right away - as a full-time companion to Frank, the writer's eccentric nine-year-old, a boy with the wit of Noel Coward, the wardrobe of a 1930s movie star, and very little in common with his fellow fourth graders.

As she slowly gets to know Frank, Alice becomes consumed with finding out who Frank's father is, how his gorgeous "piano teacher and itinerant male role model", Xander, fits in to the Banning family equation - and whether Mimi will ever finish that book.

This humorous book is an LA story about a reclusive writer, her eccentric young son, and the outsider sent in to look after them. Be Frank With Me is Julia Claiborne Johnson’s debut and it’s an entertaining crossover book about love and relationships, with a dash of Hollywood glamour.

Mimi wrote a widely acclaimed once-in-a-lifetime book when she was twenty, then promptly went into isolation. Now her fortune is gone and she’s forced to write a second book to get some cash. But her nine-year-old son Frank is a handful and she’ll need some help to keep him occupied. Alice enters their lives thinking she will be helping to type the novel, but really she’s there to look after Frank.

Frank has a genius IQ and can rattle off facts about a wide range of subjects; he prefers the fashions of old Hollywood, doesn’t like to be touched, and relates better to adults than his peers. Alice gets in over her head with Frank – he is a lot to take in. He is quirky and loveable but tiresome too.

All day Mimi is locked up in her room typing away. I was worried all along that something like The Shining was going on behind closed doors. The unapproachable Mimi never really warms to Alice and I can’t say I warmed to Mimi.

The mysterious handyman/family friend Xander drops by occasionally to check in on this trio, as well as Alice’s employer from the publishing house. Meanwhile, Alice tries to gather clues about Mimi’s past and Frank’s parentage.

Tavia Gilbert narrates the audiobook and does a bang-up job. She nails the voice of Frank, using a flat, deadpan voice and also captures Mimi’s caustic tone. I recommend you listen to this one if you get the chance. Check out a sample:

This is an engaging, smart read that I think will appeal to YA and Adult readers. I grew quite attached to this cast of characters and selfishly wanted a little more closure at the end though.

4 thoughts on “Audiobook Review: Be Frank With Me”