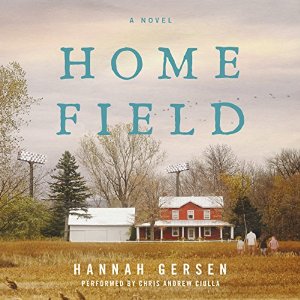 The heart of Friday Night Lights meets the emotional resonance and nostalgia of My So-Called Life in this moving debut novel about tradition, family, love, and football.

As the high school football coach in his small, rural Maryland town, Dean is a hero who reorganized the athletic program and brought the state championship to the community. When he married Nicole, the beloved town sweetheart, he seemed to have it all—until his troubled wife committed suicide. Now, everything Dean thought he knew is thrown off kilter as Nicole’s death forces him to re-evaluate all of his relationships, including those with his team and his three children.

Dean’s eleven-year old son, Robbie, is withdrawing at home and running away from school. Bry, who is only eight, is struggling to understand his mother’s untimely death and his place in the family. Eighteen-year-old Stephanie, a freshman at Swarthmore, is torn between her new identity as a rebellious and sophisticated college student, her responsibility towards her brothers, and reeling from missing her mother.

As Dean struggles to continue to lead his team to victory in light of his overwhelming personal loss, he must fix his fractured family—and himself. When a new family emergency arises, Dean discovers that he’ll never view the world in the same way again.

Transporting readers to the heart of small town America, Home Field is an unforgettable, poignant story about the pull of the past and the power of forgiveness.

Home Field is about a family in crisis. Dean is the football coach in a small town and is grieving his wife’s suicide. He has two young boys at home and a stepdaughter headed off to college, and everyone is acting out in their own way. The book marketing for Home Field got to me- it’s described as Friday Night Lights meets My So-Called Life – high praise indeed. Don’t expect a readalike, but the football coach and small-town feel of Home Field are reminiscent of FNL, and the MSCL nostalgia is present in the mid-90s setting of Home Field. This is a quiet, moving novel with flawed and compelling characters. Debut author Hannah Gersen is one to watch.

Dean and his kids attempt to find a new normal after Nicole’s death. Stephanie escapes to college at Swarthmore but has trouble adjusting and memories haunt her. The youngest boy, Bryan, turns to religion thanks to his Aunt’s influence. And Robbie is starting to break school rules, earning regular sessions to see the school counselor. And Dean’s expanded role at home means changes to his work and personal life. The point of view shifts between Dean and Stephanie so we see Stephanie’s life at college and her recollections of home, as well as how Dean’s managing with the boys and at school.

The setting is small town Maryland, where football is everything. It’s set in 1996, something that I noticed mainly due to the use of landlines and payphones, and the nods to ‘90s artists like Hole, Bjork, Indigo Girls, and Nirvana. (There’s a playlist at the back of the print edition!)

This is an emotional read that gives a realistic look at grief and the effects on a family. There are some lighter moments too, and I especially enjoyed Dean’s interactions coaching the girls’ track team. Football is not a huge focus in this book; so don’t expect a Tim Riggins character in this one!

I listened to the audiobook, read by Chris Andrew Ciulla. At first, I was wondering if I should read this novel in print instead because due to the subject matter it seemed like a heavy book to listen to. But Ciulla does a capable job, and as I kept listening, I quickly got lost in the story. I did wonder if perhaps this one should have had dual narrators to line up with the Dean/Stephanie pov. I sped up the narration to 1.5x to suit my preference, and this audiobook kept my attention all the way through.

If you like small town dramas, Friday Night Lights, and quiet, character-driven stories give Home Field a shot.