Running Back is the second book in the New York Leopards series. Each book in the series is about a romance between a girl and a member of the football team. These books are quite well-rounded for New Adult, with the focus on women with really interesting careers, friends and family relationships, and of course romance. Running Back features an international setting, an archaeologist beauty, and a redheaded football player. This smart and romantic story is perfect for a lazy summer day. 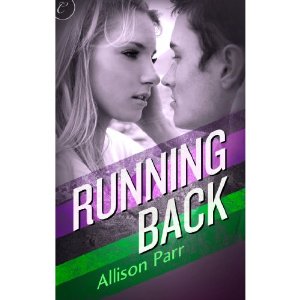 Natalie Sullivan is an archaeology grad student who dreams of unearthing an ancient lost city. She’s all set to start a dig in Ireland when she receives word that the property owner has died, and she has to secure permission from the new owner. That would be NY Leopards running back Michael O’Connor, and he is not on board with this dig at all. Natalie (a Leopards fan) is disappointed but decides to go to Ireland as planned. Guess who is also in Ireland? Mike! And he’s staying right across the hall from Natalie. Can she convince him to let her dig, and why is he so opposed to it anyway?

I liked Natalie right away, and her determination to reach her goals. She does have some personality quirks though and buries herself in her work to avoid getting too close to anyone. It seemed like she rallied the whole town to her cause and I was really hoping for her to find what she was looking for. She also has some baggage from her family that she’s working through, and it turns out Mike does as well.

The book is in Natalie’s pov, so it takes some time for us to find out why Mike is so stubborn about letting Natalie dig on his property. But, the good thing is you probably won’t guess his reason why. He is charming and I liked his sisters and extended family too. There is also some jabbing about Mike being an American football player and he has to show his stuff to the locals.

We do get some special appearances from characters in the first book, Rush Me. Rachael and her QB1 boyfriend Ryan are back to check in, and bonus, they appear in a side trip to Paris!

The romance in Running Back is sweet, and more of the fade-to-black variety. So, if the explicit scenes in some New Adult books put you off, this may be just the ticket for you.  Natalie and Mike have great chemistry, and I like the novelty of the archaeologist/football player pairing.

I listened to the audiobook, read by Leslie Bellair. She does a nice job with the voices and gets to flex her vocal muscle with different accents. Since a large portion of the book takes place in Ireland, it’s a nice touch to hear Irish accents in the book. My only reservation about the audiobook is that some of the scene transitions are a little clunky, and maybe they are easier to follow in print.  It is a fun, fast listen though. I picked up the audiobook because it’s a Kindle Whispersync title. (You buy the kindle edition for $3, and add the audiobook for $2.99, and then you can transfer back and forth.)

Imaginary Lines is the next (last?) book in this series, and it’s on sale now as well. It’s a friends-to-romance story featuring a reporter and fan-favorite Leopard linebacker Abe. I can’t recommend this series enough – romance fans should check it out this summer.

One thought on “Running Back by Allison Parr Audiobook Review”