Hey! Are you still in the mood for holiday reading? It’s still January so it’s not too late, right? I didn’t get to do as much holiday themed reading as I would have liked, so I was pleased to get the chance to read this holiday novella for the If You Believe in Me blog tour put on by Entangled. This contemporary romance novella has a home for the holidays / military theme, and features a small town heroine.  And there’s an e-book giveaway in it for you as well- sweet!

About If You Believe in Me by Natalie Damschroder: 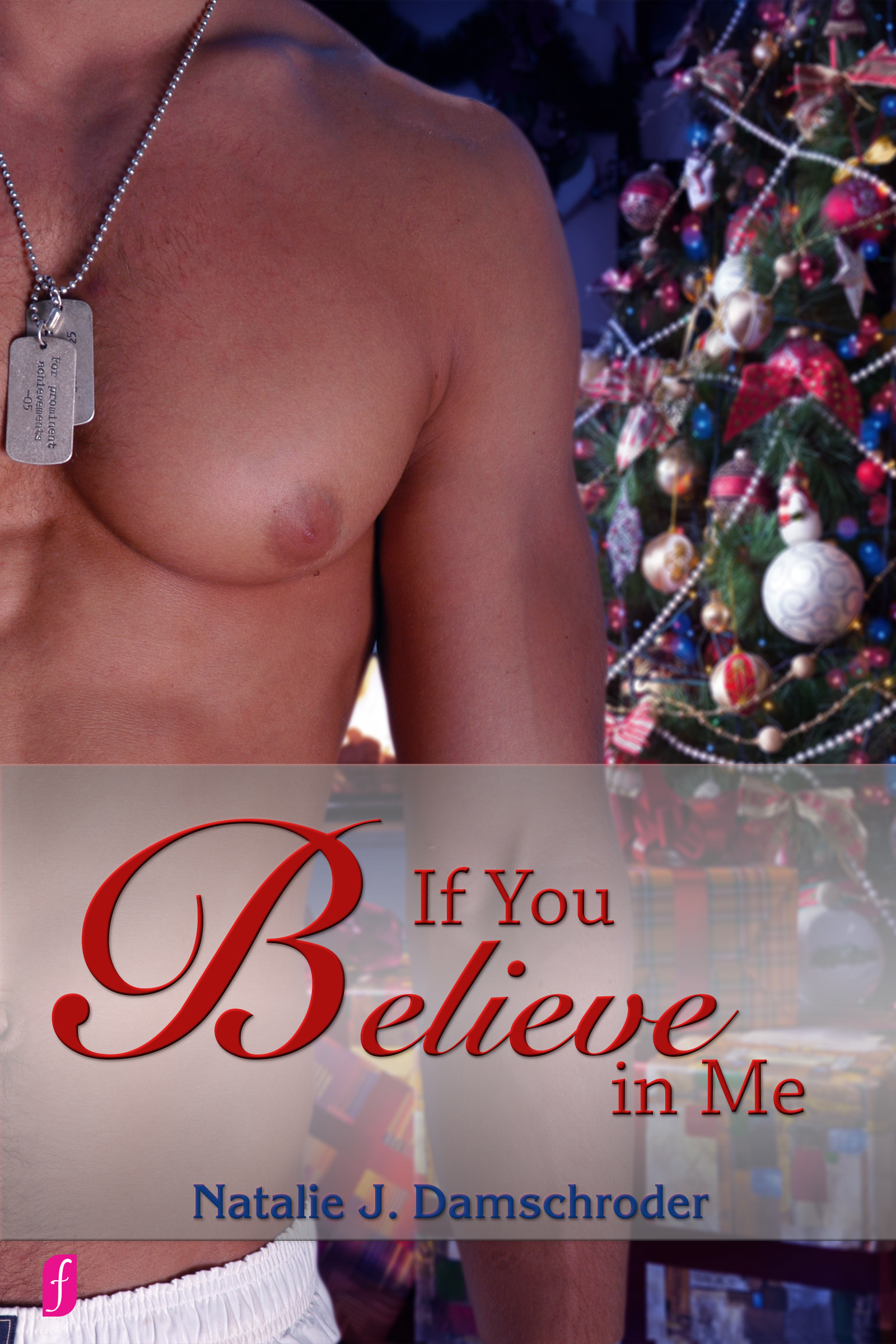 Three years ago, Amber Benedict fell in love with Kale Riker and pledged to wait for him to return from the military. Even though she rarely hears from him, she’s steadfast in her belief: he’s coming home to her, and soon. Then the government tells Kale’s family that he’s missing in action, and they have given him up for dead.

Kale Riker has been away from civilization and Amber for three long years. He’s been promised he can retire his commission when he completes his current mission, but now he’s seriously wounded and facing a long recovery. Worse still, security risks force a communications blackout, leaving him no way to let Amber know he’s alive.

Can Amber hold out against an entire town pushing her to give up on love while Kale fights to get back home to her before Christmas?

This is a heart-warming novella about hope and keeping faith when all seems lost. The story is told in dual POV so the reader knows Kale is alive, but his friends and family back home believe he’s dead. The love between the two has not diminished in their three-year separation, even though they rarely get to communicate. A lot can change in three years, and both Amber and Kale hope that they won’t be left behind.

Amber and Kale have big dreams for their future, but mainly just look forward to the day they are reunited. Amber runs a store, and spends her free time volunteering. She has a lot of friends in town, and they are gently pushing her to move on from Kale. She is really strong and faithful though, and holds on to her belief that Kale will come home, regardless of how bleak things look.

The nature of the story is a little melancholy, but hopeful. We learn about the couple’s history through Kale and Amber’s flashbacks. They have Christmas dinner traditions, and Kale always played Santa, while Amber was the helper elf. Amber keeps the traditions alive in Kale’s absence, and I hoped for Amber’s sake that Kale would make it home in time for Christmas this year.

It’s a cute, short, romantic story of perseverance overall. Since a lot of the couple’s story is told in flashbacks it’s sometimes hard to feel the connection, though I liked the emotional tone. It’s a good, quick, inspirational read to get into the holiday spirit.

Find out more about the book and author here:

Congrats to Amy who won a copy of the If You Believe in Me e-book!

Get Lucky: Kindle Deals
Top Ten Books to Listen to at the Beach
Writing Great Books for Young Adults Excerpt and Giveaway
Book Cover Reveal: Olivia Twisted by Vivi Barnes
Waiting on: This Song Will Save Your Life by Leila Sales