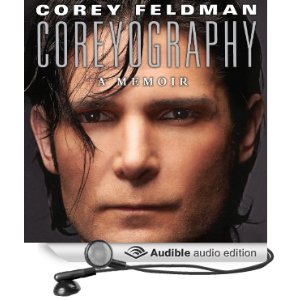 I feel like I know Corey Feldman from growing up with his movies, but in his new celebrity memoir he reveals a side the public didn’t see. Feldman tells the true Hollywood story of a child star and doesn’t hold anything back. It’s a cautionary tale about what fame does to kids in the business. Feldman grew up on TV and movie sets, becoming the family breadwinner before he was in double digits, and eventually the pressure took its toll. Bullying, drugs, and physical and emotional abuse left a permanent mark on Feldman, and he tells all in this gutsy memoir.

The first time I saw Corey Feldman on screen was in Gremlins. He was the Christmas-tree-wearing-kid who first spilled water on Gizmo, unleashing Stripe and the other gremlins on the town. He turned up soon after in The Goonies, Stand By Me, and The Lost Boys, the latter where he struck up a friendship with Corey Haim, and the two would soon be known as “The Corey’s.”

Corey Haim’s story intersects with Feldman’s in Coreyography. Haim had his own demons and story to tell, but of course he didn’t get that chance, and Coreyography begins with the death of Feldman’s childhood friend.

In this memoir, Corey Feldman discusses his turbulent home life, where his mom was on drugs and physically and emotionally abused him. Even though he had to work long, hard hours at a young age, supporting his family, he felt safer on set than at home, and eventually he won legal emancipation at age fifteen. But even so there were still dangers on set and people ready to take advantage of his innocence.

Feldman dishes about life on a movie set, the good times and bad, like learning to cry on cue, and meeting celebrity friends like Michael Jackson, ironically one of the most stable influences in his life. When Feldman wasn’t on set, he had to attend school like anyone else. You’d think that a child star would be popular at school but he was bullied like nobody’s business.

It’s uncomfortable at times listening to Feldman speak so frankly about the abuse he suffered. But you get the sense that he’s a survivor and is using his experience to inspire others to get help.

I listened to the audiobook, performed by Corey Feldman himself. He shows emotion throughout the intensely personal story, and pokes fun at himself at times. Also- who knew he was so good at celebrity impressions? His Michael Jackson impression is uncanny. Feldman performs a lot of voice personalities throughout the book, like Sam Kinison, Paul Reubens, and Kiefer Sutherland. The voice Feldman uses for his mother is exaggerated and makes her even less sympathetic. Corey Feldman’s own voice has his signature rasp and the story is that much more meaningful coming from his mouth. On the technical side, there’s a few awkward pauses and inconsistent phrasing in the delivery but they didn’t detract from the story.

This is an entertaining celebrity memoir that movie fans will eat up. There’s a who’s who of 80s-era teen celebrities in Coreyography that provide a sense of nostalgia, and will make you never want to put your kid in the movies.

Check out Corey Feldman in the studio recording Coreyography: