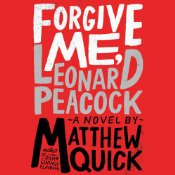 It’s Leonard Peacock’s 18th birthday and he’s planning to make it his last. There are many reasons and disappointments that led him to this decision, and he doesn’t take it lightly. Armed with his grandfather’s P-38 Nazi pistol, Leonard goes to school with the intent to murder his former best friend before taking his own life. First, though, he has four goodbye gifts to deliver to people that have made a difference in his life. Forgive Me, Leonard Peacock takes place over 24 hours as Leonard sets out to carry out his murder-suicide plan.

I loved Matthew Quick’s Silver Lining’s Playbook so I’ve been eager to read his latest book, Forgive Me, Leonard Peacock. Quick taught high school so is someone who has a lot of experience working with teens, and that comes through in this book. It reads very real, and makes you think about how you could make a difference in someone’s life that needs you.

As you can probably tell, this is not an easy read, though very topical.  Leonard is sad and angry, and feels invisible and like there’s nothing to look forward to. The 24-hour style of the book makes the story feel even more intense. I was constantly on edge and worrying over Leonard’s fate throughout the book.

Through flashbacks we get to see the factors that figured into Leonard’s decision to take his life.  We meet the four people that Leonard considered goodbye worthy: Walt, Leonard’s elderly neighbor who introduced him to Humphrey Bogart films, Baback, the violinist peer, Lauren, the homeschooled Christian, and Herr Silverman, the Holocaust class instructor. Leonard’s absent parents also figure into his state of mind, as well as the former best friend and murder target Asher, and their stories come to play as well.

The book does a good job of illustrating the portrait of a suicidal teen. Though he exhibits many signs you are supposed to notice in these cases, not many do. It’s heart-breaking to read about Leonard losing hope for the future too, because he sees so many depressed adults commuting in the morning, going to jobs that they hate. So, what does Leonard have to look forward to? He thinks “It gets better” is a joke. His observations about his adult “role models” really made me think.

One of my favorite quotes from the book:

I listened to the audiobook, read by Noah Galvin. Wow, Galvin does a great job getting into the mind of Leonard- he becomes the character. You can hear the hurt, anger, confusion, and sadness in his words. It’s hard to listen to the audiobook at times, because it does make the story hit home even more. I have a copy of the ARC to refer to, and I noticed after I listened to the book that the print version includes footnotes in the storytelling, around 70 footnotes or so. The audiobook incorporates the footnotes into the story seamlessly so you’d never know they existed stylistically. The narrative shifts between past and present, but it doesn’t get confusing in the audiobook. The only thing that threw me at first was the “letters from the future” though I think maybe that’s purposeful. Leonard is a powerful book made even more powerful in audio form.

I think this book will appeal to fans of The Perks of Being a Wallflower- it had a similar vibe to me. It’s a sophisticated read that I think readers of mature YA and literary fiction will appreciate. And with school shootings in the news and the topic of gun laws front and center, this book is very timely and discussion worthy. A worthwhile read that I couldn’t put down.