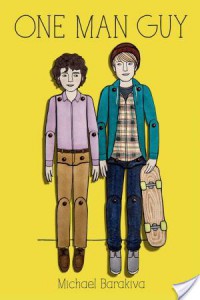 Alek Khederian should have guessed something was wrong when his parents took him to a restaurant. Everyone knows that Armenians never eat out. Why bother, when their home cooking is far superior to anything "these Americans" could come up with? Between bouts of interrogating the waitress and criticizing the menu, Alek's parents announce that he'll be attending summer school in order to bring up his grades. Alek is sure this experience will be the perfect hellish end to his hellish freshmen year of high school. He never could've predicted that he'd meet someone like Ethan.

Ethan is everything Alek wishes he were: Confident, free-spirited, and irreverent. When Ethan gets Alek to cut school and go to a Rufus Wainwright concert in New York City's Central Park, Alek embarks on his first adventure outside the confines of his suburban New Jersey existence. He can't believe a guy this cool wants to be his friend. And before long, it seems like Ethan wants to be more than friends. Alek has never thought about having a boyfriend - he's barely ever had a girlfriend - but maybe it's time to think again.

Michael Barakiva's One Man Guy is a romantic, moving, laugh-out-loud-funny story about what happens when one person cracks open your world and helps you see everything - and, most of all, yourself - like you never have before.

One Man Guy is a cute story about coming out, cultural identity, cuisine, and the city.  This love story is adorable, and has a great family theme as well.

I live in a city with a large Armenian community, so was intrigued that the Khederian family in One Man Guy is Armenian. The family provides some comic relief (especially the opening chapter at the restaurant) but also some heartwarming moments, cultural perspective, and many mouth-watering foodie scenes.

Fourteen-year-old Alek has to go to summer school to bring up his math grades. He hasn’t failed a class- his parents just have extremely high standards for him.  He’d rather play tennis or hang out with his best friend Becky, but when he gets friendly with skater boy Ethan he thinks maybe this summer school thing won’t be so bad after all.

Alek and Ethan decide to ditch summer school one day and leave New Jersey for a New York adventure. This is a big deal for Alek, who never gets in trouble, as opposed to Ethan who is known as a D.O. (dropout) and well versed in the art of forging absence notes. Ethan shows Alek all the great things you can do in New York with only a $10 budget (Mamoun’s Falafel-yum) and they go to a Rufus Wainwright concert, and hit an art museum. Alek never thought of himself as gay before but he finds himself falling for Ethan, and the feeling seems to be mutual. How will Alek’s traditional family take this news?

The romance is sweet in One Man Guy and it’s easy to see how Alek was drawn to Ethan. I loved their little escape from reality. But like other good coming-of-age stories it was great to see Alek slowly gain confidence and become more comfortable in his own skin, independent of his new bf.

This is Michael Barakiva’s debut novel, and I liked the mix of culture, lgbt romance, and family themes. Some of the teen dialogue didn’t ring true to me (coming from the parent of a teen) but I also thought maybe that could be an East Coast/West Coast thing.

I listened to the audiobook, performed by actor Michael Chernus. (He plays Piper’s brother, Cal Chapman, in Orange is the New Black) I enjoyed Chernus’ narration – he sounds casual and appropriately teenager-y and nails the comic timing of the book. He uses a light accent and more mature sounding voice for Alek’s parents, and makes Ethan’s slang words sound probably more authentic than they do in the text. I think Chernus did a good job with the material.

One Man Guy is a cute read with substance and recommended for readers that like books about romance, culture, New York, and family. The ending is a little unrealistically happy but pleased me just the same.

Check out a sample of the audiobook:

5 thoughts on “One Man Guy by Michael Barakiva Audiobook Review”