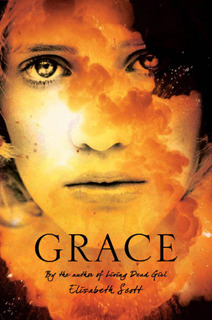 Grace was raised to be an Angel, a herald of death by suicide bomb. But she refuses to die for the cause, and now Grace is on the run, daring to dream of freedom. In search of a border she may never reach, she travels among malevolent soldiers on a decrepit train crawling through the desert. Accompanied by the mysterious Kerr, Grace struggles to be invisible, but the fear of discovery looms large as she recalls the history and events that delivered her uncertain fate.

Set in a bleak world in the near future, Grace has been trained to give her life for the People’s cause to oust ruler Keran Berj. Grace has always known this was her path, and she was prepared to die when it was asked of her. However, she always had her doubts, and when the time came she was unable to fulfill her mission. Now Grace is on the run and with a traveling companion who is also running from the past.

This is the second book I have read from this author, the first being Living Dead Girl. Both books are compelling, haunting stories wrapped in a small package. At only 200 pages, this book can be read in one setting. However, the subject matter is weighty, timely and thought provoking. The short chapters and spare writing powerfully convey the character’s frame of mind.

The story begins as Grace has hopped a train and is on the run; the details of how she got there are filled in through flashbacks. The whole story had me on edge as I felt Grace’s anxiousness and fright as she waited to get caught. She has spent her whole life being told what to do and now is trying to understand and learn what it will be like to be free. She has always felt out of place as she has watched the other Angels go so willingly to complete their suicide missions. With the help of her traveling companion Kerr, Grace is questioning all that she ever knew. Kerr has his own heart breaking story to tell, and I was pulled into his story as much as Grace’s.

Most of the action takes place on the train, and the claustrophobic environment contributes to the moody atmosphere of the story. Some of the difficult scenes take place “off camera” and are even more mysterious and disturbing as the reader is left to fill in the blanks. The character of Grace makes hard choices and is brave to go off into the unknown to live life for herself. This haunting character struck a chord with me.

Grace is a powerful dystopian book set in a recognizable near future world. The themes are those that many will relate to with several discussion points that could be explored in a classroom setting.

I’m glad I took a chance on this book, and maybe next time I’ll even read one of this author’s lighter novels. Elizabeth Scott’s next book is called Between Here and Forever and is due out in May 2011.

I read this book as part of Presenting Lenore’s Dystopian February event. Check out her blog to find out more about the dystopian genre.

The Contemps Challenge
The Faerie Ring by Kiki Hamilton

6 thoughts on “Grace by Elizabeth Scott”