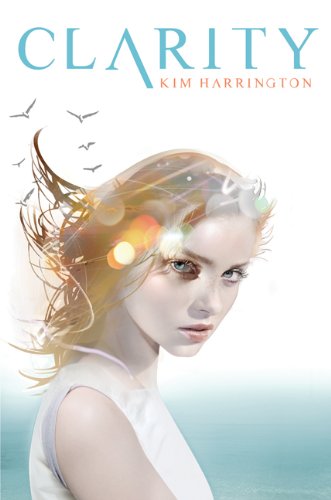 Clarity (Clare) Fern is part of a gifted family with supernatural talents. She works alongside her mother and brother to provide readings to tourists visiting their town. When a rare murder takes place in the town, Clare is asked to use her talents to help solve the case. The catch is Clare must work alongside her ex-boyfriend who betrayed her, and the handsome detectives son. The crime scene hits a little too close to home when she discovers her brother was one of the last people to see the victim. Clare must put her talents to the test and rise to the challenge before the killer strikes again.

Clarity is a fun and fast-paced young adult murder mystery set in a picturesque beach community from debut author Kim Harrington. The murder investigation casts suspicion on several members of the town and will leave you guessing until the very end. The story is rounded out with a love triangle with two handsome guys competing for Clare’s affections.

The supernaturally talented Fern family has set up shop in Eastport, a touristy beach location on Cape Cod where the locals look upon them as freaks. Clare’s gift is the ability to see visions by holding an object. Periwinkle (Perry) is Clare’s brother and his gift is the ability to talk to the dead. Perry’s strange behavior and relationship to the murder victim however places him at the top of the suspect list. Since Clare is an outcast at school, she mainly hangs out with Perry and his friend Nate. Clare’s mother has the ability to read minds, which is terribly annoying for her children. Clare’s mother is thrilled that her family was asked to consult in the murder investigation as it validates their talents.

Clare is strong willed and fiercely loyal to her family. She wants to solve the crime before her brother is implicated in the murder. Clare is uneasy to work with her ex-boyfriend Justin who broke her heart. Justin regrets the break up and wants to win Clare back. Clare is trying to move on and is interested in the detective’s son Gabriel. He is more skeptical of Clare’s talents and wants to her to prove herself by solving the case.

Clarity is a short and sweet fast-paced thrilling mystery. This book should appeal to fans of YA books such as The Body Finder and Paranormalcy. The action and the suspense kept me turning the pages late at night as I was trying to solve the mystery. The characters and their supernatural talents mixed with crime solving and romance makes Clarity a bright and shiny debut.

3 thoughts on “Clarity by Kim Harrington”