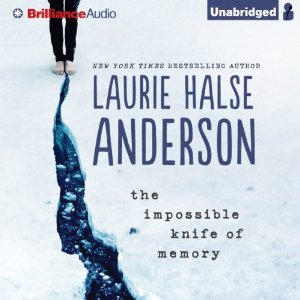 The Impossible Knife of Memory is about PTSD and how it effects the sufferer and those around them. Laurie Halse Anderson is never one to shy away from tough subject matters, and tackles PTSD with honesty and emotion. This issue is realistic and topical, and this edgy story is sure to resonate with many readers.

Hayley and her father Andy have never put down roots – Andy is a truck driver who home-schooled Hayley on the road. But now Andy thinks it’s time to settle in to his hometown so Hayley can attend high school. Andy is a war veteran with severe PTSD from his time serving in Iraq. Hayley grew up without a mom and has had to in many ways be the parent to her dad. He has daily struggles, and his flashback triggers bring on alcohol and drug abuse, and Hayley has to stay on top of him to take care of his basic needs.

Considering that Hayley has far more adult responsibilities than her peers, it’s hard for her to relate to the carefree students at school. She doesn’t have the luxury of planning for college like the other students – who will look after her dad? She calls them zombies:

How many girls in my gym class had to clean up gunpowder and barrel oil after school?

Maybe that was why I want to slap so many of the zombies; they had no idea how freaking lucky they were. Lucky and ignorant, happy little rich kids who believed in Santa Claus and the tooth fairy and thought that life was supposed to be fair.

We get a glimpse of Andy’s state of mind through brief chapters in his POV. It’s clear he is in a troubled state of mind, but he chooses to self-medicate to cope rather than accept the medical and counseling help he needs.

Hayley has two non-zombie friends, her neighbor Gracie, and Finn, a nice guy at school who sees through to the real Hayley. Finn surprises Hayley by having demons of his own, and that helps to strengthen their bond.

Another complicated relationship is with Hayley’s sort-of stepmother Trish, who broke Hayley’s heart by walking out on the family. Now that she’s back in the picture, can Hayley forgive her and accept her help?

Andy and Hayley have a lot of healing to do and I wanted them to get the support they needed. Hayley is smart and funny and could have a bright future but she is in this holding pattern. She loves her dad dearly but doesn’t know how to help him at this point. Can she dare to hope for something more for her future- could she walk away?

I listened to The Impossible Knife of Memory, and Julia Whelan performs the nine-hour audiobook, with Luke Daniels performing Andy’s chapters. I’ve listened to Julia Whelan many times, and she’s good at inhabiting her characters. She performs Laurie Halse Andersons’ lyrical words with care and helps the story shine. And Luke Daniels illustrates Andy’s tortured state of mind with his delivery. This is a powerful story made more so by the riveting audio performance.

Laurie Halse Anderson has still got it, and her latest heavy-hitter doesn’t disappoint. Strong voice, character development, and story – you’re missing out if you’re not reading her books.

I would usually link to an audiobook sample here, however I couldn’t find one to share. But-I found this great Q&A series with the author on Penguin Young Readers YouTube channel. Check it out if you have a chance.

In The Impossible Knife of Memory Hayley has a hard time adjusting to high school. She’s bright and a clever writer but struggling in math, and is a frequent visitor to detention. Her guidance counselor struggles to get through to her, and Hayley is someone who could easily fall through the cracks without the right motivation. Laurie Halse Anderson talks about US high schools below, and I think she makes some great points: