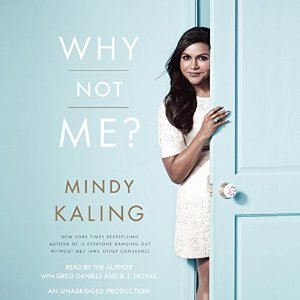 From the author of the beloved New York Times bestselling book Is Everyone Hanging Out Without Me? and the creator and star of The Mindy Project comes a collection of essays that are as hilarious and insightful as they are deeply personal.   In Why Not Me?, Kaling shares her ongoing journey to find contentment and excitement in her adult life, whether it’s falling in love at work, seeking new friendships in lonely places, attempting to be the first person in history to lose weight without any behavior modification whatsoever, or most important, believing that you have a place in Hollywood when you’re constantly reminded that no one looks like you.   In “How to Look Spectacular: A Starlet’s Confessions,” Kaling gives her tongue-in-cheek secrets for surefire on-camera beauty, (“Your natural hair color may be appropriate for your skin tone, but this isn’t the land of appropriate–this is Hollywood, baby. Out here, a dark-skinned woman’s traditional hair color is honey blonde.”) “Player” tells the story of Kaling being seduced and dumped by a female friend in L.A. (“I had been replaced by a younger model. And now they had matching bangs.”) In “Unlikely Leading Lady,” she muses on America’s fixation with the weight of actresses, (“Most women we see onscreen are either so thin that they’re walking clavicles or so huge that their only scenes involve them breaking furniture.”) And in “Soup Snakes,” Kaling spills some secrets on her relationship with her ex-boyfriend and close friend, B.J. Novak (“I will freely admit: my relationship with B.J. Novak is weird as hell.”)   Mindy turns the anxieties, the glamour, and the celebrations of her second coming-of-age into a laugh-out-loud funny collection of essays that anyone who’s ever been at a turning point in their life or career can relate to. And those who’ve never been at a turning point can skip to the parts where she talks about meeting Bradley Cooper.

Mindy Kaling is back with another new humorous memoir, Why Not Me? Since her 2011 book, Is Everyone Hanging Out Without Me? (And Other Concerns), came out before the launch of The Mindy Project, this book covers her life as a tv star and showrunner. Mindy also shares her thoughts on beauty, love, sex scenes, body image, likeability, hard work and confidence and more. Check out the book trailer:

I still haven’t watched The Office, but The Mindy Project is one of my TV favorites, and it made me want to know more about the person behind the show. Mindy seems like someone you’d want to be friends with and I think one of the keys to her popularity is how relatable she is.

In Why Not Me, Mindy lets the reader into her world with her starlet beauty secrets, like no one shows their real hair in Hollywood and tailoring is a must. She also talks about brushing shoulders with Barack Obama and striking up a romance with a White House staffer. She tells us how she found out she wasn’t nominated for an Emmy the moment before she had to read the nominees on live television, how “sex scenes are the tits.”

In addition to talking about showbiz, Mindy also inspires with her thoughts on the complement “effortless” (“What’s so wrong with effort, anyway. It means you care”). Mindy reflects on body image and the media’s fascination with her curves. She also talks about her “it’s complicated” relationship with B.J. Novak.

The book is dedicated to Mindy’s mother who died of cancer in 2012. I lost my mom the same year and was curious if Mindy would bring talk about losing her mother in the book. Her mom was an OB-GYN like the character Mindy Lahiri, and Mindy mentions that her mom gave her some input about the character for the show. Otherwise, there are not a lot of family anecdotes in this book, but maybe there will be for the next one.

Mindy Kaling reads the audiobook and that makes the conversational tone of the book feel that much more personal. The audio is a really fun listen, but there are pros and cons to the audio experience here. For one, you miss out on a lot of personal photographs that are referenced in the book, such as in the “A Day in the Life of Mindy Kaling” section. There is also a fantasy segment in the book that is a what-if about Mindy as a Latin teacher at a Manhattan private school that is in email format that I think works better in print. But on the plus side, Mindy’s Harvard Law School Class Day speech as read by Mindy is a great audio bonus. This audiobook is an entertaining listen for fans of humorous memoirs, but if you’re a Mindy fan like me you’ll want to pick up a print copy too.

In this audiobook excerpt, Mindy talks popular TV tropes in Coming this Fall:

2 thoughts on “Audiobook Review: Why Not Me? by Mindy Kaling”