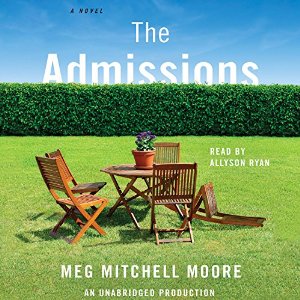 The Admissions brilliantly captures the frazzled pressure cooker of modern life as a seemingly perfect family comes undone by a few desperate measures, long-buried secrets - and college applications!
The Hawthorne family has it all. Great jobs, a beautiful house in one of the most affluent areas of Northern California, and three charming kids with perfectly straight teeth. And then comes their eldest daughter's senior year of high school....
Firstborn Angela Hawthorne is a straight-A student and star athlete with extracurricular activities coming out of her ears and a college application that's not going to write itself. She's set her sights on Harvard, her father's alma mater, and, like a dog with a chew toy, Angela won't let up until she's basking in crimson-colored glory. Except her class rank as valedictorian is under attack, she's suddenly losing her edge at cross country, and she can't help but daydream about the cute baseball player in English class. Of course Angela knows the time put into her schoolgirl crush would be better spent coming up with a subject for her term paper - which, along with her college essay and community service hours, has a rapidly approaching deadline.
Angela's mother, Nora, is similarly stretched to the limit, juggling parent-teacher meetings, carpool, and a real estate career where she caters to the mega-rich and super-picky buyers and sellers of the Bay Area. The youngest daughter, Maya, still can't read at the age of eight; the middle child, Cecily, is no longer the happy-go-lucky kid she once was; and the dad, Gabe, seems oblivious to the mounting pressures at home because a devastating secret of his own might be exposed. A few ill-advised moves put the Hawthorne family on a heedless collision course that's equal parts achingly real and delightfully screwball.

The Admissions is about a high school senior who has worked her whole academic life to get into Harvard. Meanwhile, her upper-middle-class Northern California family seems to have it all together on the outside, but inside they all have some secrets to admit. The Hawthorne family’s picture perfect California dream is starting to fade out.

I’m a parent of a high school junior so I was interested The Admissions, and this book both stressed me out and gave me some new perspective about the college admission process! There is a scene in the book where Angela is meeting with the Harvard interviewer and going over all her extracurriculars and accomplishments. She really had to go overboard to stay competitive and the pressure was just overwhelming for her (and for me as the listener.)

Angela’s parents have always encouraged her in her Harvard pursuits, but as we dig deeper into the story we see where that pressure is coming from. Mom Nora is a successful real estate agent trying to stay on top of her game. Dad Gabe is a business consultant and Harvard alum who is particularly eager for Angela to get that acceptance letter. Both parents have setbacks on the job that they are keeping from the rest of the family and Angela’s acceptance seems more important than ever.

The Admissions pulled me in right away and I stayed interested in Angela’s fate, and seeing how the family would navigate their secrets. Their obsession with being the best at everything led to some questionable behavior and I couldn’t wait to see how it would all play out.

I listened to The Admissions audiobook, read by Allyson Ryan. I’m familiar with Ryan from a couple YA audiobooks, most recently 99 Days. Ryan does a good job with the narration, and making each voice of the Hawthorne family distinct. Her pace was a little slow for my taste so I sped up the narration on the Audible app. But, other than that this is an audiobook I listened to quickly and the narration didn’t distract from the story.

I’d recommend The Admissions to other parents of high-school students – there is some good advice in that Harvard admission experience. It’s a good read for fans of family dramas too, though not an escapist enough read for me! I’m looking forward to reading more from Meg Mitchell Moore.

Audiobook Review: The Real Doctor Will See You Shortly

2 thoughts on “Audiobook Review: The Admissions by Meg Mitchell Moore”