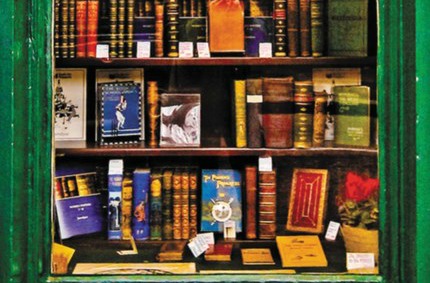 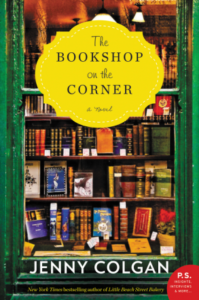 Nina Redmond is a literary matchmaker. Pairing a reader with that perfect book is her passion… and also her job. Or at least it was. Until yesterday, she was a librarian in the hectic city. But now the job she loved is no more.

Determined to make a new life for herself, Nina moves to a sleepy village many miles away. There she buys a van and transforms it into a bookmobile—a mobile bookshop that she drives from neighborhood to neighborhood, changing one life after another with the power of storytelling.

From helping her grumpy landlord deliver a lamb, to sharing picnics with a charming train conductor who serenades her with poetry, Nina discovers there’s plenty of adventure, magic, and soul in a place that’s beginning to feel like home… a place where she just might be able to write her own happy ending.

In The Bookshop on the Corner, English librarian Nina Redmond is out of a job when her library downsizes to focus more on digital content. She decides to pick up the library’s discards and start her own mobile library, relocating from Birmingham to the Scottish Highlands. Her library bus soon has the whole town reading, and the librarian may find her own romantic happy ending in the process.

I love a good book-about-books and this one is so much fun. As a librarian, Nina is well read and prides herself on being able to match anyone with the right book. She name-drops several popular authors and series in this love letter to books.

Nina has had bad luck with romance so she is a little gun-shy about starting something new in her new town. She gets a little smitten with Marek, a train conductor and fellow book lover who helps her with her book hauling endeavors. Nina’s landlord, local farmer Lennox, is the strong and silent type. He’s not much for reading, but there is more to him than meets the eye. He reminded me of another popular fictional Scotsman:

In addition to all the book love in this one, I also enjoyed Nina’s inspirational journey. She always wanted a bookshop, and losing her job gave her the courage to make it happen, and in a brand new town no less.

The author dedicates this book to all readers, and offers tips on the best places to read: Holding an e-reader in the tub? Use your nose to turn the page. This is a feel-good read for book lovers, think books like The Readers of Broken Wheel Recommend. I’m very eager to read more from Jenny Colgan-all her delicious-sounding books about cupcakes sound very tempting!

The Bookshop on the Corner is on sale now. Check it out on Goodreads or visit HarperCollins for purchase information.

Look inside The Bookshop on the Corner:

Excerpt from THE BOOKSHOP ON THE CORNER:

The problem with good things that happen is that very often they disguise themselves as awful things. It would be lovely, wouldn’t it, whenever you’re going through something difficult, if someone could just tap you on the shoulder and say, “Don’t worry, it’s completely worth it. It seems like absolutely horrible crap now, but I promise it will all come good in the end,” and you could say, “Thank you, Fairy Godmother.” You might also say, “Will I also lose that seven pounds?” and they would say, “But of course, my child!”

That would be useful, but it isn’t how it is, which is why we sometimes plow on too long with things that aren’t making us happy, or give up too quickly on something that might yet work itself out, and it is often difficult to tell precisely which is which.

A life lived forward can be a really irritating thing. So Nina thought, at any rate. Nina Redmond, twenty-nine, was telling herself not to cry in public. If you have ever tried giving yourself a good talking-to, you’ll know it doesn’t work terribly well. She was at work, for goodness’ sake. You weren’t meant to cry at work.

She wondered if anyone else ever did. Then she wondered if maybe everyone did, even Cathy Neeson, with her stiff too-blond hair, and her thin mouth and her spreadsheets, who was right at this moment standing in a corner, watching the room with folded arms and a grim expression, after delivering to the small team Nina was a member of a speech filled with jargon about how there were cutbacks all over, and Birmingham couldn’t afford to maintain all its libraries, and how austerity was something they just had to get used to.

Nina reckoned probably not. Some people just didn’t have a tear in them. (What Nina didn’t know was that Cathy Neeson cried on the way to work, on the way home from work—after eight o’clock most nights—every time she laid someone off, every time she was asked to shave another few percent off an already skeleton budget, every time she was ordered to produce some new quality relevant paperwork, and every time her boss dumped a load of administrative work on her at four o’clock on a Friday afternoon on his way to a skiing vacation, of which he took many.

Eventually she ditched the entire thing and went and worked in a National Trust gift shop for a fifth of the salary and half the hours and none of the tears. But this story is not about Cathy Neeson.)

It was just, Nina thought, trying to squash down the lump in her throat . . . it was just that they had been such a little library.

Children’s story time Tuesday and Thursday mornings. Early closing Wednesday afternoon. A shabby old-fashioned building with tatty linoleum floors. A little musty sometimes, it was true. The big dripping radiators could take a while to get going of a morning and then would become instantly too warm, with a bit of a fug, particularly off old Charlie Evans, who came in to keep warm and read the Morning Star cover to cover, very slowly. She wondered where the Charlie Evanses of the world would go now.

Cathy Neeson had explained that they were going to compress the library services into the center of town, where they would become a “hub,” with a “multimedia experience zone” and a coffee shop and an “intersensory experience,” whatever that was, even though town was at least two bus trips too far for most of their elderly or strollered-up clientele.

Their lovely, tatty, old pitched-roof premises were being sold off to become executive apartments that would be well beyond the reach of a librarian’s salary. And Nina Redmond, twenty-nine, bookworm, with her long tangle of auburn hair, her pale skin with freckles dotted here and there, and a shyness that made her blush—or want to burst into tears—at the most inopportune moments, was, she got the feeling, going to be thrown out into the cold winds of a world that was getting a lot of unemployed librarians on the market at the same time.

“So,” Cathy Neeson had concluded, “you can pretty much get started on packing up the ‘books’ right away.”

She said “books” like it was a word she found distasteful in her shiny new vision of Mediatech Services. All those grubby, awkward books.

Nina dragged herself into the back room with a heavy heart and a slight redness around her eyes. Fortunately, everyone else looked more or less the same way. Old Rita O’Leary, who should probably have retired about a decade ago but was so kind to their clientele that everyone overlooked the fact that she couldn’t see the numbers on the Dewey Decimal System anymore and filed more or less at random, had burst into floods, and Nina had been able to cover up her own sadness comforting her.

“You know who else did this?” hissed her colleague Griffin through his straggly beard as she made her way through. Griffin was casting a wary look at Cathy Neeson, still out in the main area as he spoke. “The Nazis. They packed up all the books and threw them onto bonfires.”

“That’s what everyone thinks. Then before you know it, you’ve got Nazis.”
—

With breathtaking speed, there’d been a sale, of sorts, with most of their clientele leafing through old familiar favorites in the ten pence box and leaving the shinier, newer stock behind.

Now, as the days went on, they were meant to be packing up the rest of the books to ship them to the central library, but Griffin’s normally sullen face was looking even darker than usual. He had a long, unpleasantly scrawny beard, and a scornful attitude toward people who didn’t read the books he liked. As the only books he liked were obscure 1950s out-of-print stories about frustrated young men who drank too much in Fitzrovia, that gave him a lot of time to hone his attitude. He was still talking about book burners.

“They won’t get burned! They’ll go to the big place in town.”

Nina couldn’t bring herself to even say Mediatech.

Griffin snorted. “Have you seen the plans? Coffee, computers, DVDs, plants, admin offices, and people doing cost–benefit analysis and harassing the unemployed—sorry, running ‘mindfulness workshops.’ There isn’t room for a book in the whole damn place.” He gestured at the dozens of boxes. “This will be landfill. They’ll use it to make roads.”

“They will! That’s what they do with dead books, didn’t you know? Turn them into underlay for roads. So great big cars can roll over the top of centuries of thought and ideas and scholarship, metaphorically stamping a love of learning into the dust with their stupid big tires and blustering Top Gear idiots killing
the planet.”

“You’re not in the best of moods this morning, are you, Griffin?”

“Could you two hurry it along a bit over there?” said Cathy Neeson, bustling in, sounding anxious. They only had the budget for the collection trucks for one afternoon; if they didn’t manage to load everything up in time, she’d be in serious trouble.

“Yes, Commandant Über-Führer,” said Griffin under his breath as she bustled out again, her blond bob still rigid. “God, that woman is so evil it’s unbelievable.”

But Nina wasn’t listening. She was looking instead in despair at the thousands of volumes around her, so hopeful with their beautiful covers and optimistic blurbs. To condemn any of them to waste disposal seemed heartbreaking: these were books! To Nina it was like closing down an animal shelter. And there was no way they were going to get it all done today, no matter what Cathy Neeson thought.

Which was how, six hours later, when Nina’s Mini Metro pulled up in front of the front door of her tiny shared house, it was completely and utterly stuffed with volumes.

Jenny Colgan is the New York Times bestselling author of numerous novels, includingLittle Beach Street Bakery, Christmas at Rosie Hopkins’ Sweetshop, and Christmas at the Cupcake Café, all international bestsellers. Jenny is married with three children and lives in London and Scotland.

Enter to win a print copy of The Bookshop on the Corner, courtesy of HarperCollins: