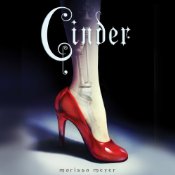 Also by this author: Scarlet

Humans and androids crowd the raucous streets of New Beijing. A deadly plague ravages the population. From space, a ruthless lunar people watch, waiting to make their move. No one knows that Earth's fate hinges on one girl.... Cinder, a gifted mechanic, is a cyborg. She's a second-class citizen with a mysterious past, reviled by her stepmother and blamed for her stepsister's illness. But when her life becomes intertwined with the handsome Prince Kai's, she suddenly finds herself at the center of an intergalactic struggle, and a forbidden attraction. Caught between duty and freedom, loyalty and betrayal, she must uncover secrets about her past in order to protect her world's future.
An unabridged recording (10 hours, 2 minutes).

Cinder has been getting a lot of attention in the blogosphere and I’ve had my eye on it for a while, finally deciding to pick up the audiobook. I’ve never read anything like this Sci-Fi Cinderella retelling and that appealed to me as something new and different. I’m glad I tried it because it ended up being such a fun read/listen. Cinder is the first book in a new four book series that will also feature Little Red Riding Hood, Rapunzel, and Snow White and it’s Marissa Meyer’s debut novel.

Cinder is a 16-year-old cyborg mechanic who lives in New Beijing after World War IV. She was in an accident as a kid, and saved with robotic parts, including a robotic foot that stands in for Cinderella’s iconic glass slipper. Cinder is an outsider in society, though she is known as one of the best mechanics in New Beijing. Her accident left her without a memory of her time before, and her past is a mystery waiting to be unraveled. Like the fairy tale, Cinder lives with her awful stepmother and two stepsisters, though with a twist. There is also a prince and a ball, but otherwise Cinder spins it’s own story, and there are a lot of surprises in store. Some of the challenges Cinder faces are the deadly plague that’s hit New Beijing, political unrest, family drama, and managing the attention of the young and single Prince Kai.

The heroine Cinder is my favorite part of the story. She is likable, smart and brave, and very human in spite of her robotic parts and extraordinary abilities. The other characters also added a lot to the story, both the androids and the humans. The romance with Prince Kai is refreshingly done and I can’t wait to see how it develops in future installments.

The plot moves at a swift pace, and quickly pulled me in. It was fun seeing how the Cinderella story played out in Cinder’s dystopian cyborg world.  The retelling is similar enough to the original to catch the references but with enough of a twist to keep things interesting. Even though I don’t read a ton of Sci-Fi, it was easy to follow along and I could totally envision the world that Meyer creates.

I listened to the audiobook, and narrator Rebecca Soler does a stellar job with the narration. She gives a lively reading and sounds like how I would imagine Cinder to sound. Her pacing is very good and she reads with the emotion that is called for.  She handles the different male and female voices and accents with ease, and injects Cinder’s sense of humor into the reading. I actually liked the narrator so much I downloaded another audiobook that she reads to check out. This is a good audiobook to try if you’ve ever been interested to test out the experience.

Cinder is an entertaining kickoff to the quadrilogy, and it left me excited about the series and eager to read more.  I think Cinder would appeal to fans of fairytale retellings, Sci-Fi, dystopian, and romance. The next book of The Lunar Chronicles is called Scarlet, and yes it’s about Little Red Riding Hood, though Cinder’s story also continues.  Scarlet is due out next year.