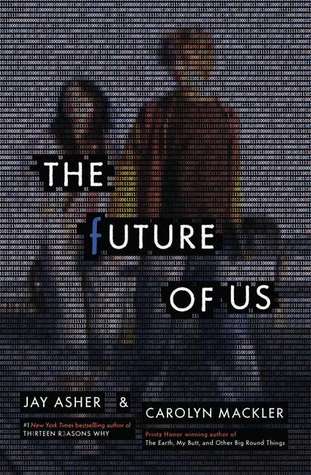 More Info: LibraryThing | Goodreads | The Future of Us Facebook page

If you had the opportunity to look into the future and see how your life turned out, would you do it? And would you try to change things about your current life to impact that future? The Future Of Us explores that topic with two characters that get a glimpse of their future in an unexpected way. The year is 1996, when the Internet is just starting to gain mass appeal, and America Online is the most popular website. Emma has just received her first computer and sets up a free AOL account when she gets the surprise of her life when Facebook appears on her screen, long before it’s invention. She sees her life fifteen years in the future through her future self’s Facebook status updates. Josh and Emma, shocked by what they find out on their respective profile pages, soon see themselves struggling to fit their future into their present lives. This thought-provoking and engaging book explores the idea of destiny and how our choices shape the future.

In 1996 I had a computer but was just getting my feet wet with email and the Internet. I never had AOL, but received the CD-ROM inserts weekly in the mail. I remember using a Netscape browser at the time and had a different Internet provider than AOL, but I recall that AOL was overwhelmingly the popular choice at the time. (This is an interesting article comparing the Internet of 1996 to 2011.) It was easy for me to relate to the characters and their limited computer experience as well as the pop culture references of the time such as Friends, Dave Matthews, and Toy Story. It was also fun for me to see the characters puzzle over references to Glee and Netflix that they see in their future status updates.

If I was in Josh and Emma’s shoes when I was in high school I would probably be glued to the computer and looking up the Facebook profiles of everyone I knew. With all that power, it’s a wonder that they were able to go about their daily lives. I was immediately fascinated by this concept and what they would uncover and try to change. The book also provides an interesting social commentary on privacy issues of today and the personal as well as the banal details we share online.

The book is co-written by Jay Asher & Carolyn Mackler, and this is my first experience with their work. The story is told through Josh and Emma’s alternating POV and it was hard to tell the difference in the writing between the two authors. The chapters flowed very smoothly and without any jarring stylistic differences.

Emma’s character frustrated me at times with some of the rash decisions she makes. Based on her actions in 1996, it made perfect sense to me how her future life ends up the way that it does.  Josh is a little more mature and easy going and I felt more sympathetic to his character. As they wrestle with the knowledge of their future it is interesting to see how they try to change, or pursue the path that they see.

Overall I enjoyed this book, and couldn’t put it down until I found out how it ended. The Future Of Us is a fast paced and enjoyable read but also makes you think about your life and the choices you make. I also liked the 90s nostalgia, but wonder how much of that will translate to younger YA’s. My tween daughter read it and loved the Facebook aspect of the book but lost interest a bit when the action focused on the present day. Initially I also was drawn in by the facebook from the future concept, but later appreciated the deeper message behind the story. Look for The Future Of Us in stores November 21st.

6 thoughts on “Review: The Future Of Us by Jay Asher & Carolyn Mackler”