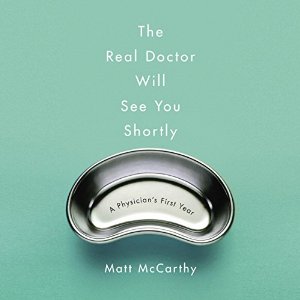 In medical school, Matt McCarthy dreamed of being a different kind of doctor - the sort of mythical, unflappable physician who could reach unreachable patients. But when a new admission to the critical care unit almost died his first night on call, he found himself scrambling. Visions of mastery quickly gave way to hopes of simply surviving hospital life, where confidence was hard to come by and no amount of med school training could dispel the terror of facing actual patients.

This funny, candid memoir of McCarthy's intern year at a New York hospital provides a scorchingly frank look at how doctors are made, taking readers into patients' rooms and doctors' conferences to witness a physician's journey from ineptitude to competence. McCarthy's one stroke of luck paired him with a brilliant second-year adviser he called "Baio" (owing to his resemblance to the Charles in Charge star), who proved to be a remarkable teacher with a wicked sense of humor. McCarthy would learn even more from the people he cared for, including a man named Benny, who was living in the hospital for months at a time awaiting a heart transplant. But no teacher could help McCarthy when an accident put his own health at risk, and showed him all too painfully the thin line between doctor and patient.

The Real Doctor Will See You Shortly offers a window on to hospital life that dispenses with sanctimony and self-seriousness while emphasizing the black-comic paradox of becoming a doctor: How do you learn to save lives in a job where there is no practice?

In The Real Doctor Will See You Shortly, Dr. Matt McCarthy recounts his first year as an intern at Columbia University Medical Center. Is his first-year practicing medicine similar to that of the doctor’s we see in TV dramas? Yes and no, but for the most part these real-life interns are too busy for on-call room hookups or cocktails after work. This book shows how stressful the first year of a new doctor’s life is- will Matt sink or swim?

First off, Dr. Matt McCarthy can write! (He was also a minor league baseball player, which he wrote about in Odd Man Out so I guess writing is his third career) McCarthy is a good storyteller and has great recall for details of his cases, and some of his patients linger over the course of the book.

McCarthy talks about his first week on the job, and how unprepared he is to treat actual patients. In this teaching hospital, the new doctor rotates through the different specialties supervised by residents. One of his most memorable mentors he calls “Baio” because of his resemblance to the Charles-in-Charge actor. Matt aspires to be like the cool and confident Baio but gets off to a rocky start.

In his first year as an intern, Matt has to develop his bedside manner, learn to quickly and efficiently (and accurately) diagnose patients, and learn the technical skills of the job. One of his scarier mishaps occurs when he accidently sticks himself with an HIV-tainted needle when he’s drawing blood.

I listened to the audiobook, read by author Matt McCarthy. McCarthy makes you feel like you are right there in the hospital in these life-or-death situations. He is the right person to narrate this book since he is familiar with the medical terminology and jargon. He has a cool, calm voice like you’d expect from a doctor. This is an entertaining and fascinating audiobook that reassured me that I’d never be cut out for such a stressful life as that of an intern.

If you like TV medical dramas, memoirs, or ever wanted to know what it’s really like for first-year residents I recommend you check out this book.

Check out an audio clip:

2 thoughts on “Audiobook Review: The Real Doctor Will See You Shortly”