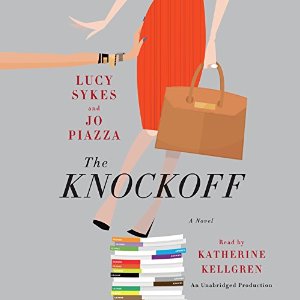 An outrageously stylish, wickedly funny novel of fashion in the digital age, The Knockoff is the story of Imogen Tate, editor in chief of Glossymagazine, who finds her 20-something former assistant Eve Morton plotting to knock Imogen off her pedestal, take over her job, and reduce the magazine, famous for its lavish 768-page September issue, into an app.

When Imogen returns to work at Glossy after six months away, she can barely recognize her own magazine. Eve, fresh out of Harvard Business School, has fired "the gray hairs", put the managing editor in a supply closet, stopped using the landlines, and hired a bevy of manicured and questionably attired underlings who text and tweet their way through meetings. Imogen, darling of the fashion world, may have Alexander Wang and Diane von Furstenberg on speed dial, but she can't tell Facebook from Foursquare and once got her iPhone stuck in Japanese for two days. Under Eve's reign, Glossy is rapidly becoming a digital sweatshop - hackathons rage all night, girls who sleep get fired, and "fun" means mandatory, company-wide coordinated dances to Beyoncé. Wildly out of her depth, Imogen faces a choice - pack up her Smythson notebooks and quit or channel her inner geek and take on Eve to save both the magazine and her career. A glittering, uproarious, sharply drawn story filled with thinly veiled fashion personalities, The Knockoff is an insider's look at the ever-changing world of fashion and a fabulous romp for our Internet-addicted age.

In The Knockoff, the editor-in-chief of Glossy magazine returns from medical leave to find her fashion magazine is now an app. And former assistant from hell Eve Morton is running the show. Can Imogen Tate learn to embrace technology and lead Glossy in its new incarnation, or will the new Glossy be “All about Eve?”

I haven’t had this much fun with a fashion fiction book since The Devil Wears Prada, and I loved the role reversal in The Knockoff. This is one delicious beach read that you (and your mom) won’t be able to put down. As Eve would say, “Buy it Now!”

When Imogen returns to the new Glossy, she has a steep learning curve. Imogen is only 42 but kind of a technophobe. She’s someone who misses her Blackberry, has a Hotmail account and likes to print out her emails to read. Now that Glossy has gone digital Imogen must keep up to survive. A few kind-hearted tech-savvy friends help her to tweet and Instagram like a pro.

Eve is a terror at Glossy- making her staff work 24-hours a day, going on firing sprees, backstabbing, and just generally being the worst boss ever. She has a personal vendetta against Imogen; so much that Imogen loathes going to work in the morning. Eve even labels the toy dinosaur in her office Imogen. Eve is an over-the-top baddie, but the Millennial/Generation X culture clash is a relatable and interesting subject.

This book has many comical moments that would translate really well to the big screen. Co-authors Lucy Sykes and Jo Piazza put their expertise from the fashion and journalism world to good use and make The Knockoff an entertaining read. It’s hard to believe that Imogen, the parent of young kids, would be so clueless about social media, but I loved how her story evolved and rooted for her to come out on top at the end.

I listened to The Knockoff audiobook, read by veteran narrator Katherine Kellgren. Kellgren always gives her all in her performances, and her performance in The Knockoff is like a one-woman Broadway show. She switches from a polished British accent for Imogen to a bold and brassy American accent for Eve. It was hard to believe these two very distinct voices could come from just one person! Kellgren gives a lively, animated reading that brings the story to life.

Here is an audio excerpt from the UK edition (known as Techbitch), narrated by Katherine Kellgren.

The Knockoff is a blast to read and one that should definitely be in your beach bag this summer.

One thought on “Audiobook Review: The Knockoff by Lucy Sykes and Jo Piazza”