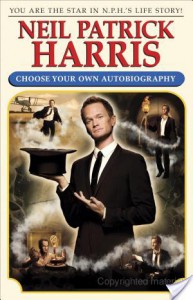 You've already made a great choice by picking up the audio edition of Neil Patrick Harris' Choose Your Own Autobiography. This hilarious book has been adapted especially for the audiobook edition so you’ll hear all of the same fun and humor from the printed version but you don’t have to make any decisions or jump around - just kick back, relax, and listen. Plus, it features exclusive bonus audio of young Neil delivering an adorable speech! That’s audio you won’t hear in any version of this book other than the audiobook!

Neil Patrick Harris tells all in a unique and humorous Choose Your Own Adventure style memoir! Choose Your Own Autobiography uses second-person pov just like the CYOA books and puts the reader in Neil Patrick Harris’ (NPH) shoes. “You” are in the driver’s seat and get to jump to “your” career and personal highlights as you go. I listened to the audiobook format, which works a little differently than the print version, but I think it’s still a great way to go since you hear the story in the authors’ voice.

I am a fan of humorous memoirs and of NPH the personality, so I had a feeling this book would be lots of fun. I know NPH from awards shows and Dr. Horrible’s Sing-Along Blog but haven’t seen an episode of Doogie Howser or HIMYM. This book is great for casual fans that want to learn more about the actor, and longtime fans will get a kick hearing behind the scenes anecdotes.

This is one of the more entertaining memoirs I’ve read/listened to. The CYOA format is nostalgic and clever and helps keep the story flowing in an interesting way, and I didn’t mind the second-person perspective at all.

I like this kind of celebrity memoir that includes behind the scenes info from the entertainment world as well as glimpses into your personal life. NPH dishes about his evolving career including his performances on TV, stage (I wish I got to see Hedwig!) and film, even mentioning his recent turn in Gone Girl. We also get to hear his coming out story, and about meeting husband David Burtka and how they became parents. NPH also discusses his love of magic, Disney, an epic 40th birthday scavenger hunt, and lavish vacations with Elton John.

Special guest testimonials from Sarah Silverman, Nathan Fillion, Whoopi Goldberg, Seth MacFarlane, and more also appear in the book. (The actors’ voices do not appear on the audiobook though) These provide humorous interludes and it’s nice to hear from the actor’s NPH has worked with over the years.

In addition to NPH’s life story, the book is sprinkled with magic card tricks (have a deck of cards handy), cocktail recipes (like Dr. Pourable’s Drink-Along Grog) and David Burtka’s recipe for Bolognese Sauce. Audiobook listeners will be able to access the food and drink recipes (and a cryptic crossword!) in a PDF that comes with the book.

The audiobook is a very entertaining and fast listen. NPH is an engaging reader who obviously brings a lot of personality to the table. You can’t skip around in audio format the way you are meant to do with the CYOA print version, so the audio edition tweaks the formula a bit. With NPH saying “If you want to do this keep listening, or wait a while longer/be patient.” In the audiobook, you also get to hear a bonus audio of young NPH performing a speech. Listening to NPH give his all in this audiobook and hearing about his experiences as an award show host makes me think he will be an awesome host for next year’s Oscars.

If you are a fan of NPH or humorous memoirs I think you will love this very creative autobiography! 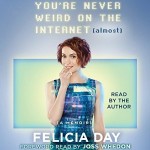 Audiobook Review: The Real Doctor Will See You Shortly
Be My Galentine

5 thoughts on “NPH: Choose Your Own Autobiography Audiobook Review”