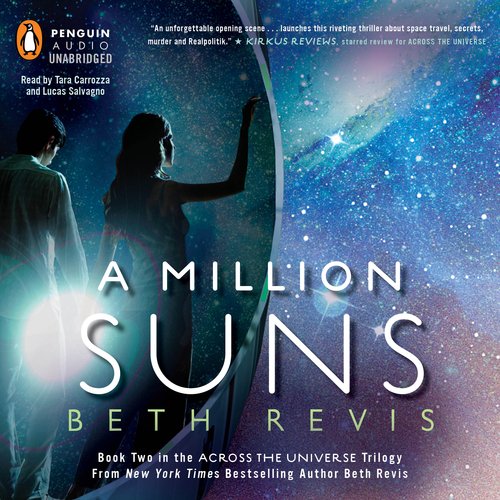 In the sequel to Across the Universe, life on the spaceship Godspeed is uncertain, as a change in leadership, a ship that’s showing it’s age, and a newly alert and agitated crew all lead to a chaotic atmosphere onboard. It’s been three months since Amy was unplugged from her cryogenic chamber aboard Godspeed, where she builds an alliance with Elder, the only person her age on the ship. Now that Elder assumes a leadership role, he must handle the pressure of guiding the ship, as well as tend to his romantic feelings towards Amy.

I have been eagerly awaiting this book for a year, since reading Across the Universe. Despite being a Sci-Fi novice, the tension, danger, and the characters made for an unforgettable read, and I hoped the sequel would be just as good. If anything A Million Suns is even better than the first book, and managed to surprise me multiple times with the direction it took. It felt like there was never a dull moment in this suspenseful sequel.

Amy and Elder narrate A Million Suns through alternating POV. The dual narration works well as we learn different aspects about the ship’s mysteries in their day-to-day explorations. Elder is especially interesting in this book, as he tries to find his footing as Godspeed’s youngest leader. Now that the inhabitants of Godspeed are off of the sedative Phydus, they are more unpredictable and questioning of the inexperienced Elder, setting the stage for an uprising. Amy also has an important role to play as Orion left her some important clues about the ship to find, in the hopes that she can set things right.  A murder mystery also keeps the inhabitants on their toes as one of the many challenges these characters face.

This series is not all about the romance, but there is some progression there. Amy is questioning whether she is drawn to Elder because he is the only boy her age on the ship, or if it is meant to be.

The book is well written and had me completely absorbed in the story. Beth Revis sets the tone so you feel the tension and cabin fever as if you were stuck on the spaceship with them. The chapters are short and fast paced and just when Amy or Elder gets a lead on something the chapter teasingly cuts to the other narrator.

This is the first of the series that I’ve experienced in audiobook format, and I think it works very well. As Elder, Lucas Salvagno is a perfect fit and conveys Elder’s state of mind realistically. Elder’s frustrations and worries all come through the reading. As Amy, Tara Carrozza is also convincing with the character, and Amy’s strength and maturity is clear in her voice. She also does well with the other character voice nuances.  This audio recording is one of the reasons I like audiobooks in general because it really makes the book come alive and like you are right there in the action.

The second book in the A Million Suns trilogy is a suspenseful thrill ride and I can’t wait to find out what Beth Revis has up her sleeve for the final book. Recommended even if you aren’t a Sci-Fi fan – the characters, suspense, and excitement are sure to entertain. A Million Suns is out today.

Other Reviews of the book:

10 thoughts on “A Million Suns by Beth Revis: Audiobook Review”