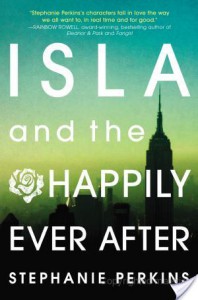 “Stephanie Perkins’s characters fall in love the way we all want to, in real time and for good.” —Rainbow Rowell, Award-winning, bestselling author of Eleanor & Park and Fangirl Love ignites in the City That Never Sleeps, but can it last? Hopeless romantic Isla has had a crush on introspective cartoonist Josh since their first year at the School of America in Paris. And after a chance encounter in Manhattan over the summer, romance might be closer than Isla imagined. But as they begin their senior year back in France, Isla and Josh are forced to confront the challenges every young couple must face, including family drama, uncertainty about their college futures, and the very real possibility of being apart. Featuring cameos from fan-favorites Anna, Étienne, Lola, and Cricket, this sweet and sexy story of true love—set against the stunning backdrops of New York City, Paris, and Barcelona—is a swoonworthy conclusion to Stephanie Perkins’s beloved series.

I never thought this day would come! After a long wait, Isla and the Happily Ever After is finally here, and Stephanie Perkins brings all the kissing, drama, international adventures and surprises that fans eat up. ISLA is super sweet and a swoon-worthy finale to the Anna and the French Kiss trilogy.

I know this series comes with a lot of hype, and is popular with everyone and their mother, but since a few years have passed since the last book I’ll give a brief recap. Each book in the trilogy centers on a different couple’s romantic and personal adventures, and familiar characters pop up in each book to tie it all together.  Anna and the French Kiss introduced us to Anna and Etienne, two teens that meet at a French boarding school.  Lola and the Boy Next Door shifts the action to San Francisco, where Lola has feelings for her neighbor, Cricket. And finally in Isla and the Happily Ever After, the setting returns to Paris, where seniors Josh and Isla find their way to each other after years of bad timing.

Josh caught Isla’s eye freshman year, but alas he had a girlfriend. Now that he’s single Isla finally gets on Josh’s radar. She’s at the top of her class, and Josh is not living up to his potential- though Josh has his future all planned out, while Isla’s future is a question mark. Their romance quickly becomes all-consuming and allows them to tune out reality, at least for a little while.

Josh and Isla’s adventures take them to the arty hot spots of Paris, New York and Barcelona. I love to travel through books so these international backdrops hold a lot of appeal to me and make the story feel even more magical. How fun would it be to travel to all the places visited in these books!

Besides the romance, Josh and Isla have family and college drama. Josh is from a political family and has to make peace with that part of his life. Isla’s graduating high school but has no idea what she wants to do. She’s smart but lacks confidence, and is also down on herself about her lack of focus. Josh is all about his art, but where does Isla’s passion lie? I think it’s okay that Isla doesn’t know what she wants yet – not everyone leaves high school with all the answers about their future.

I was happy to see the special guest appearances in ISLA – such a treat to check in with Anna, Etienne, Lola & Cricket again. I could have used a few more chapters with the whole gang together but I’m not complaining with what we got. I

I tore through ISLA and experienced all the emotions while I was reading it. This happily ever after was worth the wait, though doesn’t replace Anna and the French Kiss as my favorite. I’m eager to see what Stephanie Perkins comes up with next!