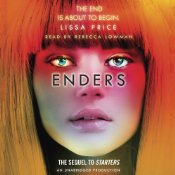 The riveting conclusion to the sci-fi thriller Starters.

Someone is after Starters like Callie and Michael – teens with chips in their brains. They want to experiment on anyone left over from Prime Destinations – Starters who can be controlled and manipulated. With the body bank destroyed, Callie no longer has to rent herself out to creepy Enders. But Enders can still get inside her mind and make her do things she doesn’t want to do. Like hurt someone she loves. Having the chip removed could save her life – but it could also silence the voice in her head that might belong to her father. Callie has flashes of her ex-renter Helena’s memories, too…and the Old Man is back, filling her with fear. Who is real and who is masquerading in a teen body?

No one is ever who they appear to be, not even the Old Man. Determined to find out who he really is and grasping at the hope of a normal life for herself and her younger brother, Callie is ready to fight for the truth. Even if it kills her.

Enders is the second and final book in the Starters duology. In this series, teens are implanted with a microchip that allows their bodies to be controlled by the older members of society. Creepy, huh?

I read Starters almost two years ago, and I remember the sci-fi body rental concept made an impression. The idea is that there are only the very old and the very young left in the world after a biological attack left the unvaccinated “Middles” vulnerable. The wealthy seniors (“Enders”) rent out the bodies of the young “Starters” for fun, though some of the Enders abuse the rental agreement. And the “Old Man” in charge has his own ideas about how to use renter’s bodies. Can Callie help herself and other Starters regain control of their bodies?

One thing I like about a two-book series is that there is no filler- it’s non-stop action! Callie dodges trouble left and right in Enders and can’t shake the Old Man loose. He’s back and has some new tricks up his sleeve that makes him even more of a threat to Callie and the other chip-implanted “Metals.”

Callie’s brother and her friend Michael are back, along with some new characters, notably Hyden. Hyden teams up with Callie to try to stop the Old Man – he is technically savvy and seems to be on the same page as Callie too. He’s a good addition to the series.

The final act of the book is where Enders really shines and kept my ear glued to the audiobook. Like in Starters, Enders pushes boundaries and is an uncomfortable and disturbing read at times. And the ending gives the satisfying payoff I was hoping for.

I listened to the audiobook of Enders, performed by Rebecca Lowman. I’m familiar with Lowman from Eleanor & Park and Fangirl, so it was a new experience hearing her perform something of a sci-fi nature. Lowman speaks clearly and carefully and her tone fits the story. Sometimes she would have to speak with a robotic tone of voice as the story dictated and she pulled that off well. Lowman’s Callie sounds age appropriate and strong and her male voices are subtle and believable. The pace at times was a little slower than I prefer, even though stylistically I’m sure it was the right choice. Overall I think the story is probably equally enjoyable in print or audio format.

Enders didn’t wow me as much as Starters overall, maybe because the sense of urgency wasn’t there since it had been awhile since I read the first book. The story is entertaining though and there are some fun twists that I didn’t see coming. I’m content with the series conclusion as is and feel like all my questions were answered. I’m looking forward to seeing what Lissa Price cooks up next.