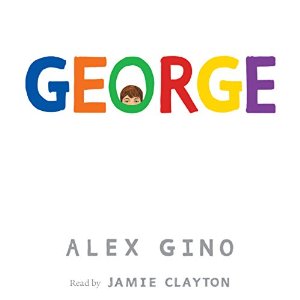 BE WHO YOU ARE. When people look at George, they think they see a boy. But she knows she's not a boy. She knows she's a girl. George thinks she'll have to keep this a secret forever. Then her teacher announces that their class play is going to be Charlotte's Web. George really, really, REALLY wants to play Charlotte. But the teacher says she can't even try out for the part . . . because she's a boy.   With the help of her best friend, Kelly, George comes up with a plan. Not just so she can be Charlotte -- but so everyone can know who she is, once and for all.

Alex Gino’s debut George is a gem. This middle grade book is a timely, touching story about a young transgender girl named Melissa who is ready to share her true self with the world.

Fourth grader George knows that she’s a girl, and is ready but scared to tell her secret. She reads young girls magazines in secret and reads about what it means to be transgender. When her class puts on the play Charlotte’s Web, George really wants the part of Charlotte so everyone can see her as she really is, a girl named Melissa. But the teacher doesn’t take her seriously- luckily Melissa has an ally to help her on her journey.

It’s important to use the correct pronouns with respect to gender identity, and the third-person narrative in George helps to convey the accurate “she” and “her” pronouns for Melissa. Alex Gino keeps the tone light for the target audience and writes a relatable, yet informative story.

Melissa experiences bullying at school, and peers, her teacher, and her mom say the wrong things. This line really got to me:

Melissa’s Mom: But the world isn’t always good to people who are different. I just don’t want you to make your road any harder than it needs to be.

Melissa: Trying to be a boy is really hard.

Melissa looks forward to times in her room after school when she can relax and be herself. Encouragement comes from a friend and from some other surprising sources and readers will cheer for Melissa’s successes along the way.

I listened to the George audiobook, read by trans actress Jamie Clayton. You might know Clayton from the Netflix series Sense8. This is the first audiobook she’s narrated and she does an awesome job. Clayton conveys Melissa’s feelings of isolation when times are hard and her joy when things go her way. Clayton’s tone is just right for the story, and she really inhabits the character of Melissa. I wasn’t planning on listening to this book in audio (I already own it in print) but picked it up on a whim at the library and I’m so glad I did!

Take a listen to chapter one:

It’s great to see more middle grade and YA books like this that feature trans protagonists. Hopefully this one will find a home in many school libraries. Looking forward to reading more from Alex Gino.